“How far to Thomas now?”

Allegheny Mountain in the August twilight. Photo by Andrew Carroll.

We both know the answer, roughly, but Caleb asks me anyway, partly out of habit, partly for the excuse to unfold the well-worn state map. When opened, my map overtakes the better half of the dirty windshield, revealing the myriad of back country roads and snaking rivers that compose our nook of Appalachia. It’s more ceremonial than useful by now, but our route is highlighted and I’m proud of the jagged yellow lines I traced from home to our destination.We’ve been driving since breakfast, making our way west into the Alleghenies. We leave behind us the outcroppings of new vinyl homes in the frontier suburbs and the sleepy bedroom communities of Washington, D.C., nestled in the foothills of the ancient Blue Ridge mountains. Named for the dark azure haze the chain creates as rests in the horizon, you can’t see the blue skyline of the soft-rolling mountains until you leave them for another chain.The map is outspread, my bare feet are rooted to the dashboard, and his arm hangs lazily out his window—the body language of a summer road trip. In the late August afternoon, we pass through shades of brilliant sunshine and thunder-showers. The humidity clings to our skin like flies to fly-tape. But the further we journey westward, the cooler the air becomes—the combination of rolled-down windows at 70 miles per hour and the proverbial open road.These familiar winding highways are made by dynamite blasts, and they cut through impressive rock formations, creating roadside cliffs of falling rock and coal. We weave in switchbacks and hairpin turns through hollers and up around mountainsides. Summer’s end wildflowers grow up around the rock and flood the valleys below. Black-eyed Susans, sky-blue chicory tangled with Queen Ann’s Lace rise up along the medians, ebbing and flowing with the elevation.

We spend the day driving westward with the sun, arriving in the early evening in downtown Thomas, West Virginia. At dusk, we are going to a party. Our invitation is simply a dress code:

“Excessively fancy dress is encouraged as always. Prom dresses, Top hats, parasols…all welcome. (We’re hoping for someone with a monocle this year.)”

Hidden in the old coal town of Thomas is the annual White Room Gallery party. Our friend, Seth, is an artist there and co-owner/operator of the gallery. We’ve been making the trip to see him every summer for years.

Thomas, population 586 at the last census, is three quiet streets of turn-of-the-20th-century redbrick buildings that run parallel with the Blackwater river. The walk-up apartments above the old store fronts have great windows with iron balconies, like belle epoque windows in the south of France. East Avenue, home of the White Room, is a street lost in time—at once both Appalachian mining town and a quiet neighborhood rue in Nice.

When we arrive at 14 East Ave, the sun sinks behind the pines, leaving only the glow of the yellow lights outpouring from the party. Fireflies begin to dance along the fringes of the street, blinking neon in the trees. East Avenue is alive with cricket song and we can hear the bluegrass down at the Purple Fiddle cafe. Still in the car, I change from my driving clothes—denim shorts and a tank top—to a semi-sheer white linen dress that falls past my knees. 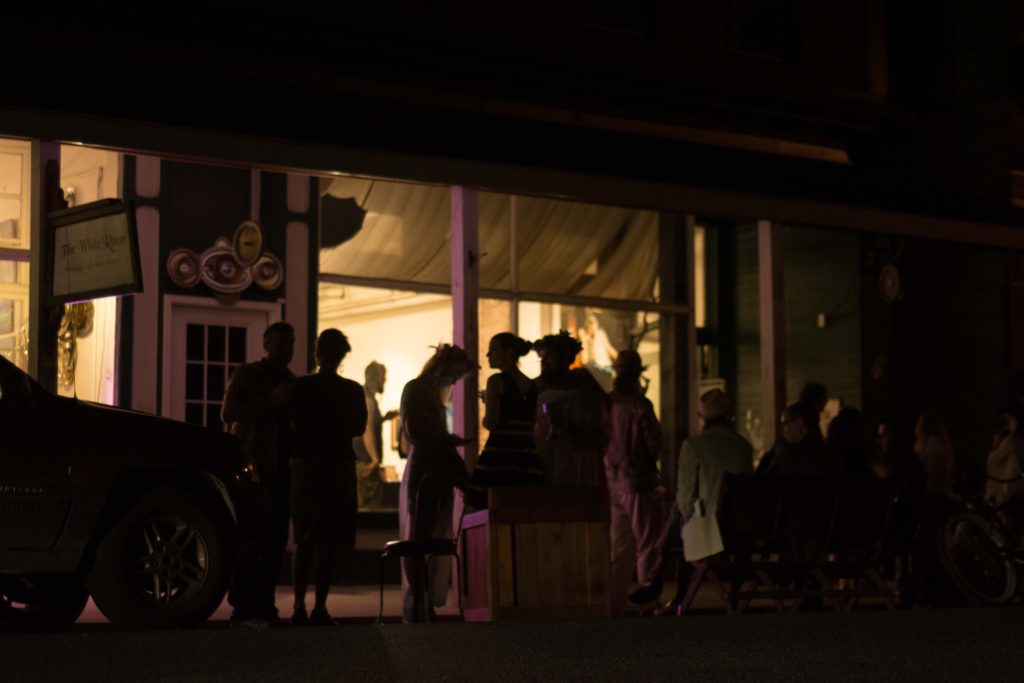 A crowd gathers outside the White Room Gallery in 2014. Photo by Andrew Carroll.

On the street, we meet fellow Seth-enthusiasts, Amy and Joey. They are friends of Caleb’s, with a shared penchant for sharp dress and folk art. Amy comes in a blue satin strapless ball gown, with a big bow on the bust and lower-back. She is barefoot. Joey is in a bowtie and jacket, Caleb in a fine black bowler hat and suspenders. A tenured professor from the local college wears a Hawaiian shirt Great line. Out-of-towners and locals alike arrive in cotton tees, plaid, Halloween costumes, and thrift-shop evening wear.

The party has already begun, and the four of us enter the art gallery, marked simply “The White Room.” The first art space we encounter is a hybrid of gallery and shop, with curious handmade trifles for sale, like illustrated buttons and cards. The walls are lined with miniature bronze sculpture and large prints from a range of local artists (not “the art of seth” as his work is collectively referred to, lowercase intended).

In the room over, passing the stairs that lead to the residential artists’ walk-up apartments, is the main affair: the party’s annual exhibition: photography this year, plus the art of seth. As in any proper art gallery, the patrons drift along, standing before the art displays, musing about the works before them. The people who gather here, hailing from as far as New York and as near as the room upstairs, smile at one another like old friends and help themselves to the abundant free wine.

In this secondary room hangs the photography exhibition. The series is black and white, industrial feeling. Overlays of architecture and street views are blended in four exposures from one vantage point. The exposition “Every Path is Viable” poses the notion of endless possibility in one’s personal direction. The photographer, John, tells us that the photos aren’t representations of the places they’re from— “they’re vehicles for getting lost.”

The images have the same gritty, grainy quality of the iconic 1960s Appalachian photography, back in the days when our backyard images of silent suffering dominated the national “War on Poverty” and John F. Kennedy’s presidential campaign. Those years, metropolitan America began to take an interest in what happens in these isolated hills, exploiting our hillbilly culture and mountain mysticism for the evening news report. West Virginia has since largely left the media limelight, retaining incidental news items exclusive to coal mining accidents, chemical spills in the water supply, and the occasional football victory. Few contemporary artists serve to give Appalachia a new, hopeful narrative. Seth is one of them.

John’s dark photography contrasts greatly with the art of seth. Seth’s whimsical illustrations are cartoonish and depict abstract human-like figures interacting with bold, minimalist landscapes. Seth is known for his prints of digital collages, created by assembling original water-paintings and acrylic works; this intermingling process produces a kaleidoscope of colors and paint textures. The procedural mix of color is always wildly varied, and the bright colors within the illustrations mark boldly against characteristic starch-white backgrounds. In the margins of each print are handwritten poems or snippits of short story written by Seth, inscribed to compliment the illustration.

Seth’s collections have aptly fanciful names, like “creatures who have art and the things they do with them” and “the encyclopedia of imaginary things.” There is a common thread throughout his prints: escapism, praise of nature, and the undeniable magic in our hills.

In the shop-room I pass over prints for sale. Made of acrylic, oil paint, lamp oil, and olive oil is “Hungry and Wild,” an abstract landscape with a lone figure walking into an unknown, colorful chaos. The handwritten note reads:

just a little past

that place you have decided was the farthest

as your unfathomably inextinguishable hope

In another style of illustration, a vibrant sharpie/micron print depicts the departure of city life to a place “out in those hills:”

“it was time to go

the city had drained of color

and as i stood up and looked

out over the rooftops

out in those hills

was the magic i was seeking”

As I mull over these prints, the revelry kicks up in the other room, with swing music and happy shouting. An older man in a tweed waist-coat joins my print-pursuit, idly flicking through images before us.

“Are you familiar with the artist’s work?”

“Oh yes, I know him personally,” I proudly offer.

“Ah, well, in that case, I’d say his ouvre is…” I turn away before we engage in snobbish art-prattle.

Instead I try to sidle closer to Seth. He wears a bright orange waist-coat over an orange button-down, with orange trousers, every shade of orange slightly different than the last. After a brief exchange of pleasantries, I tell Seth I am moving to England in the Fall, and ask which piece of art I should buy for my flat.

“I can’t possibly decide that,” he quips cheerfully, rocking on his heels.

I ask instead if he has a favorite print.

“I’m rather attached to all of them.”

And then he is whisked off by another admirer into the adjacent room again, where he pours himself another drink and chats about something undoubtedly fanciful.

I spend most of the party this way, quietly communing with the art alone, listening to the joyful cacophony of the soiree around me. After a glass or two of Pinot Gris and much prompting by Caleb and Amy, I choose a painting of a sage-green crescent moon, with a wooden ladder leading down from the moon to some planetary body below. A pink paint-dripped figure, an archetypical character of the art of seth, named Arnold, stands on the edge of the moon, peering down at the rock below. The inscribed writing tells us:

“He had dreamt of it for so

long, but now that

there were the means of actually going…

Arnold wasn’t so sure.”

This peculiar little piece of art, blatant with its message of uncertainty of the unknown, resonates with the feelings of the people of Thomas, and perhaps greater Appalachia. The desire to escape is equaled only by the urge to stay.

Once I’ve bought my print, the gallery owners bustle the last guests out of the gallery and down the street to the live music at the Purple Fiddle, where merriment continues late into the night. The party doesn’t draw to a close, but relocates, fading with the last hums of the cicadas.

When we left the party in the mountains the next morning, barreling into the golden valleys below, Caleb and I clung to stolen words and images from the gallery. Memories of Appalachia do morph into pastoral romances, of mountain worship—but this gathering of art lovers revives our mythic mountain folklore in the twenty-first century. There is a desperation in these hills, where the American dream suffocates in defiance to progress, persisting instead like stubborn weeds in the backyard of commercial Americana. Little coal towns like Thomas refuse to be stifled, and they flourish like wild flowers in August.