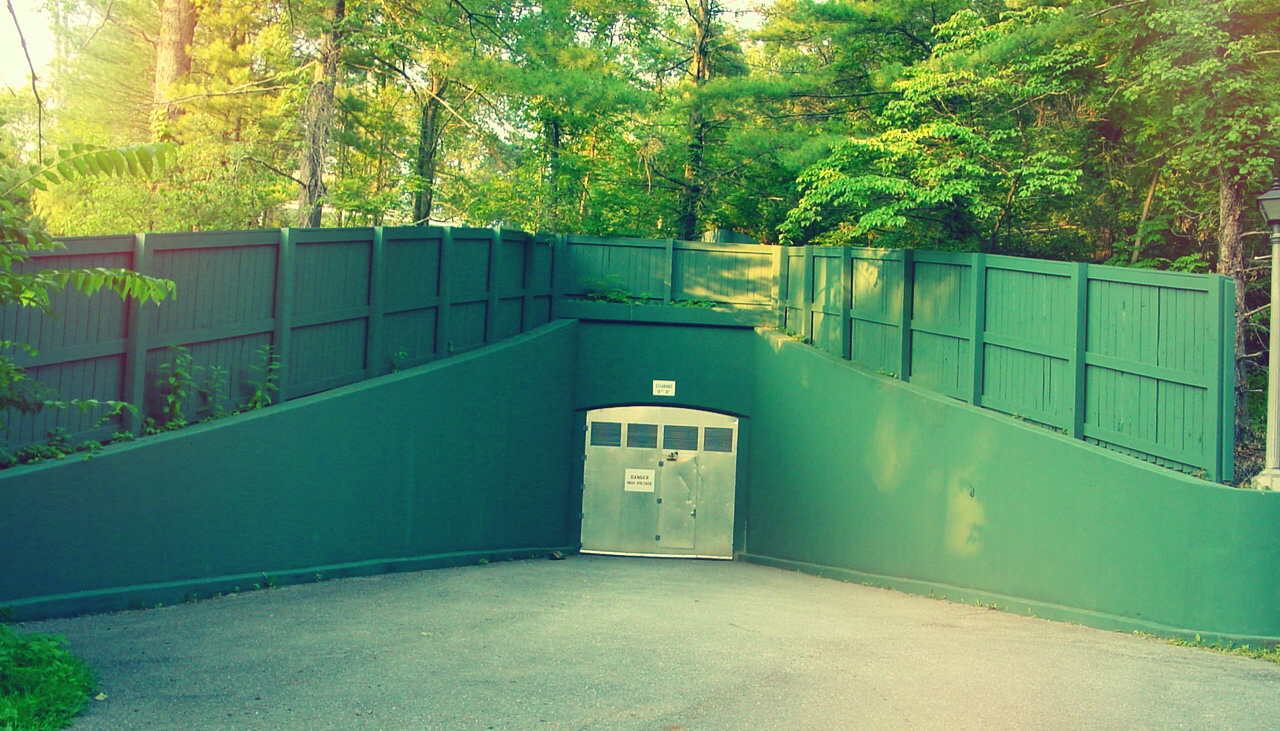 “The Bunker” at the Greenbrier

From Top Secret to Tourist Stop –“The Bunker” at the Greenbrier

Between 1961 and 1992, if an enemy bomber looked like it was headed for the Nation’s Capital with intent to drop a nuclear device, all 435 members of the U.S. House of Representatives, 100 members of the Senate, and a few dazed and confused support staff, would have been herded onto trains and buses without their families; unglamorously showered, examined and dressed in lookalike clothing; sealed inside a mountain behind massive metal blast doors; and given refuge in cramped dormitory spaces tucked neatly below and behind one of America’s most luxurious resorts—the legendary Greenbrier in the Allegheny Mountains of West Virginia.

It was a great idea in 1958 when President Dwight Eisenhower coaxed the owners of the Greenbrier—CSX Railroad—to let the government hollow out the mountain behind the 200-year resort and install a 112,544-square-foot top secret facility: but in the 21st Century, not so much. The theory was that if there was a viable threat that the capital city was about to be bombed, the legislative branch of the U.S. government could be saved and kept somewhat operational in the relative safety of “the bunker.”Between 1961 and 1992, if an enemy bomber looked like it was headed for the Nation’s Capital with intent to drop a nuclear device, all 435 members of the U.S. House of Representatives, 100 members of the Senate, and a few dazed and confused support staff, would have been herded onto trains and buses without their families; unglamorously showered, examined and dressed in lookalike clothing; sealed inside a mountain behind massive metal blast doors; and given refuge in cramped dormitory spaces tucked neatly below and behind one of America’s most luxurious resorts—the legendary Greenbrier in the Allegheny Mountains of West Virginia.

There are at least two reasons why that would not work today. First, the era of intercontinental ballistic missiles has reduced the warning time to minutes, eliminating the window of opportunity for evacuating so many people from Washington, D.C. to a safe shelter 250 miles away. Secondly, today’s Congressional collection of hyper-partisan egomaniacs, bombastic showboats, sincere public servants, and nerdy tedious policy wonks would probably end up producing fistfights or worse in such confined quarters, further reducing the already diminished effectiveness of the once-great House and Senate. Too many citizens today would be tempted to ask: “Why bother?”

Today, because the government decommissioned the bunker and moved out lock, stock and barrel, this massive complex that somehow was kept secret not only over three decades of 24/7 ever-ready operation, but, more impressively, during what must have been an incredible construction phase, has been reduced to a tourist attraction.

On a recent spring afternoon, a middle-aged man, dressed in a “Wild and Wonderful West Virginia” tee shirt and cut-off blue jean shorts, shuffled along with the other 25 people on a tour of what had once been one of the government’s most protected and successful secrets. He and his wife had paid their $35 dollars each, had their cell phones confiscated and safely stored for the duration of their visit, and joined fellow visitors to learn more about the bunker. The group’s tour guide, a local retired car dealer who let loose with a pleasantly delivered barrage of facts at every stop, herded his charges into a fancy, well-lit but stuffy elevator in the West Virginia Wing of the Greenbrier.

“We’re going to go up one floor and see the entrance to the bunker,” the guide said. “That’s right, I said up one floor. That’s because the bunker is actually built 720 feet into a mountainside rather than completely under the hotel. Its entrance and its cleverly disguised blast door, is a floor above the main floor of the Greenbrier. It’s just one example of how this was all hidden in plain sight.”
The deal Ike pitched was logical and convincing. First, the location was only 250 miles away from D.C. and there were adequate roads, rail connections, and even a serviceable airstrip nearby. Second, it was remote enough to avoid scrutiny during construction. Third, because the government already did business with and subsidized the railroad, which owned the Greenbrier, the money required to build and then lease the facility from CSX would be relatively inconspicuous. It was certainly less conspicuous than if the government were to suddenly funnel massive amounts of cash to a remote but famous playground to the wealthy.On one of the stops, the guide explained how, in the late 1950s, President Eisenhower started the whole bunker process when he convened a summit meeting at the Greenbrier with the Prime Minister of Canada and the President of Mexico. Unbeknownst to our duped neighboring heads of state, the summit was just a cover story. The President was really there to meet with the top man with CSX to pitch the idea of creating the bunker at the four star resort. This way, the meeting remained a secret. They called  the bunker idea “Project Greek Island.”

CSX agreed to terms and construction began in 1958. The Greenbrier announced it was building the West Virginia wing, which would accommodate exhibition halls and guest rooms. Contractors hauled in and poured 50,000 tons of concrete into the hole that workers carved into the shale hillside; imported from Ohio and installed four massive blast-proof doors from the Mosler Safe Co.; and even installed more than 110 urinals into what was described as exhibition hall space. Three years later and after having maintained an incredible degree of project secrecy, the bunker was finished. It contained: decontamination chambers; 18 dormitories for 1,100 people; a power plant and purification equipment including 25,000 gallon water storage tanks; three 14,000 gallon diesel fuel tanks; sophisticated communications equipment; a medical clinic with hospital beds and operating rooms; TV and radio broadcasting studios; and a cafeteria and meeting rooms.

A company called Forsythe Associates was created under the guise of being the TV maintenance folks for the hotel. Their real job was to maintain the electronics and operate the security and machinery involved with keeping the bunker operational. The bunker was staffed and ready to go around the clock every day of the year with 60 days worth of food in stock at all times. The food buys raised no suspicion because it was bought in bulk by a hotel. It all worked smoothly for 30 years.

Then, a nosy reporter named Ted Gup spilled the beans in a story published in the Washington Post on May 21, 1992 calledThe Last Resort. Since the feasibility of the bunker was based on maintaining secrecy, the government figured the whole idea had been rendered useless. Decommissioning steps began the very next day and took three years to complete.

No one knows how Gup found out about the facility or where he got so much information on it. There is a theory that the government leaked the information because the bunker was an obsolete drain on resources and it wanted to stop leasing the facility from the Greenbrier. Gup never wrote about how much the bunker cost to build and lease per year but it must have been quite a chunk of taxpayer cash.

“The Greenbrier was faced with what to do with this facility,” the tour guide explained. “That’s when a new company called CSX-IP was started up and they use the space now. Since this is such a secure facility, CSX-IP now uses it to store important documents for lots of clients. That’s why no cameras are allowed and every move we make while we are in the bunker is watched on security cameras.”

The tour guide admitted that after the bunker was decommissioned, the entire facility was gutted to remove asbestos so little of what remains on display for tourists is original. He said most of the bunk beds were recycled and are in use in military facilities elsewhere. However, there are old outdated pieces of equipment scattered about that were original like some medical and communications equipment—enough to give visitors an idea of what it would have been like to have to live in the bunker. The layout of the bunker and its tunnels and blast doors remain original and intact.

The Greenbrier, just as it did when the bunker was operational but hidden in plain sight, uses the massive room where staffs were to establish emergency offices as exhibition hall space. The tour guide did not show us the room where the Senate would have met but the theater-like room where the House would have convened was open for inspection.

A reconstructed dormitory room remains on display. The room, one of 16 that once existed, is perhaps 25 yards long and 20 yards wide. Against the walls, there are rows of the original narrow Spartan bunkbeds and cold metal lockers. There was a common toilet facility next door along with a tiny lounge area. The tour guide explained that after every election, crews would reassign bunks to new members as necessary. This is where I can envision some tough moments for our sequestered lawmakers. It would, no doubt, be a stressful experience for folks used to life as members of Congress. Squabbles would surely occur and fists would most likely swing.

Much has changed since the bunker’s secret heyday. The hotel, once approaching bankruptcy, was bought by West Virginia coal executive Jim Justice, who is a candidate for Governor in the 2016 general election. Justice seems to have infused new life into the famous 200-year-old resort. There’s a growing and popular PGA event held there annually; the New Orleans Saints hold their training camps in modern new facilities on the grounds; and occupancy at the hotel is nearly always full.

Whether you stay there as a guest or just drop by for the day, a visit to the Greenbrier is worth the trip to at least see the bunker, learn about its history, and reflect upon the protective lengths our nation once went to for the legislative branch of government in the event of nuclear war.