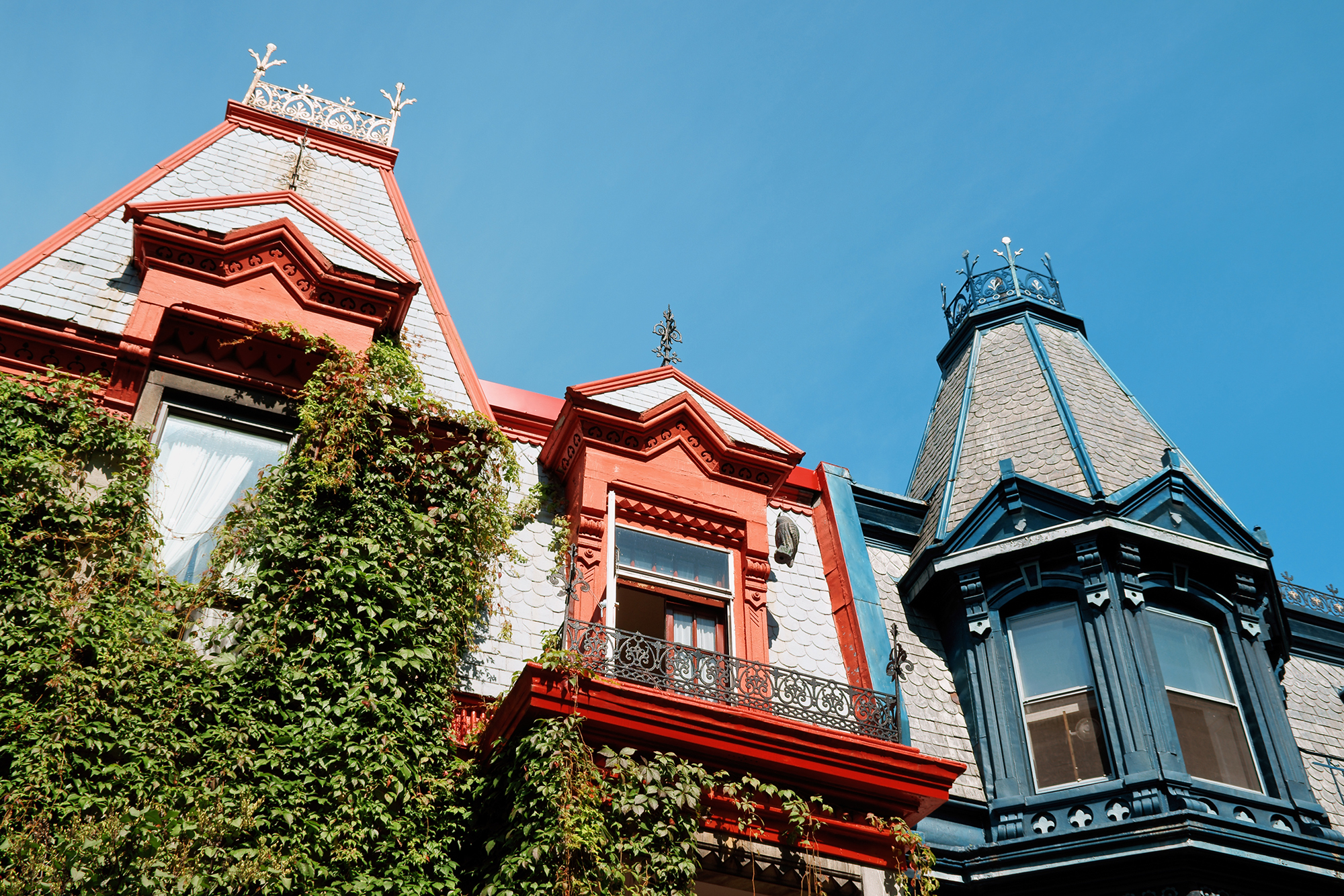 Bramwell, Home of the Millionaires

I soon arrived in Bramwell, a fascinating village and one of my favorites anywhere. It sits on an oxbow bend in the Bluestone River and is only a few hundred yards from one end to the other. In the middle are a collection of mansions, about 20 of them, built for some of the richest and most successful people in the coal industry from the late 1890s. Pocahontas housed the workers while Bramwell housed the mine owners. Most of the larger communities and some of the smaller ones in the coalfields had wealthy residents and impressive homes. But because Bramwell was consistently upscale, it has enjoyed more loving care and there is less decay. Many of the homes are still valuable, although as I would learn, surprisingly affordable.

The same friend who put me in touch with Thomas Cole gave me contact information for Jackie Shahan, who with her husband owns one of Bramwell’s most impressive homes.

Jackie was a small woman, unpretentious and chatty, with long, jet-black hair. She would never fit the image of what I envisioned as a mansion owner. But to call her house anything else would simply not be accurate.

The driveway snaked uphill between stone abutments. The house was grand, with multifaceted edges, stone walls and terra cotta roof tiling. I felt like I’d arrived at a movie set. I couldn’t figure out which of the grand doors to approach.

Welcoming me inside, she escorted me into the kitchen filled with modern appliances and poured me a glass of flavored lemonade from a bottle in the refrigerator. We went outside to the front porch, overlooking the village, sat in high, upholstered chairs, and propped our legs on the stone railing. I asked how she came to own a mansion in West Virginia.

She said she was an army brat, growing up in Germany, Spain, and Texas. Her husband was, also. He had lived in Pakistan and many other places. “We didn’t have any roots. But we’ve been here now thirty-one years. My husband is a radiologist and I was an X-ray tech. He was getting out of the military, and he found a job at the hospital in Bluefield, which he accepted before I’d even been here. That was 1984, maybe. We started looking for a home.”

Long story short, they were looking in Bluefield, but found that this home was being sold at auction. Incredibly, they placed the winning bid at a mere $165,000! I was surprised that rather than being ecstatic that they’d bought such an incredible place at such a meager price, she expressed her reluctance.

“We didn’t want to live in Bramwell. We wanted to live in Bluefield. It’s only 15 minutes away, and there is no traffic. But it is a MANSION! I had no idea how to furnish it or take care of it. It felt like a lot of responsibility. We didn’t even own furniture! I liked cities, and this was a tiny place. I was young. I’d always lived in basic, everyday houses. I was never looking for anything more. It was like, ‘Wow! But what now?’ I’m not an entertainer. I don’t know how to decorate. I had no ideas or visions. We do our own yard work; I mow a lot of lawn!

“My favorite part is the view. It overlooks the village. It’s an oasis. The (Bluestone) River is just below and beyond that is that fabulous church. It is peaceful and quiet.

“The house is huge. It has tons of personality and attention to detail. The artisans put their all into it. It cost $90,000 to build in 1912, and took three years to build. It has stone walls in the Tudor style and is reminiscent of the Biltmore (in Asheville, North Carolina). They spared no expense. It has a central vacuum system and walk-in closets which were rare at that time. All the closets have pull-out drawers and shelving. The third floor is a ballroom. There are dumb-waiters. There are gardeners’ quarters, servants’ quarters, a split-level peacock coop, and a barn.”

She said it was built by a Colonel Thomas from Wales. He married the daughter of the mine owner and so he married into money, but was every bit a coal baron in his own right. He died only four years later and the house had three owners since. “It’s a marvelous house. I’d never been in this type of setting before. We have 14 or 15 acres of land.”

I asked if it was a good move.

“Absolutely! Absolutely! This is the most wonderful life. I love Bramwell. I love this house. I love this community. I love raising kids with my friends and their friends. They went to a local school in Bramwell early on, but they graduated from Bluefield High School.”

“A good school?” I enquired.

“Yes. It’s the same school John Nash went to. My oldest daughter went to Princeton so she had that connection. One of the kids she dated also went to Princeton. When you can graduate from high school in Bluefield, West Virginia, and go to Princeton, that’s pretty good.”

At this point, I’m thinking about her daughter potentially meeting someone at Princeton who would speak derisively to her about being from West Virginia, at which point she could retort, “Yup, I went to the same school as John Nash. Touché!”

She continued, “There’s no economy really in Bramwell now. Everybody here is retired, came here with money, or works someplace else. We have schoolteachers. Magistrates. Ex-military. Musicians. Not a lot of original Bramwell people are still here.”

It started to pour rain, dampening the air and splashing into the stone goldfish pond on the lawn in front of us.

“Bramwell is very progressive. We have seven or eight gay couples. That’s nice. I was surprised I would care about my community. I was a military brat, constantly moving. Now I’ve been here over 30 years. It didn’t occur to me that I’d ever have a community network. It’s nice to plan and work and see ideas come to fruition. Pocahontas is deteriorating. It’s a cautionary tale for us here (in Bramwell) to preserve what we have. They had something irreplaceable and much of it is gone.”

“Do you feel a stigma about being a West Virginian?”

“Yes. But we live an independent life here. We forge deep friendships. I like West Virginians. We still travel a lot. My parents loved adventure. And we tagged along, all over the world. We’ve done that with our kids, too. That was important to us. Whenever we flew home and drove over the mountains and saw that sign that said, ‘Welcome to West Virginia, Wild and Wonderful,’ I always thought that my favorite thing was coming in and seeing these mountains. These mountains enclose you. As soon as I see these mountains, I always say, ‘I’m home.’ I feel like these mountains are like a big hug. They really hug you. This is the way it should be. I’ve got my mountains. I’ve got my trees. I’m home.”

She took me for a tour of her home. There were delightful surprises at every turn, with beautiful artwork, antique furniture, and whimsy throughout. The grand staircase elevated from the foyer and then split in two with a magnificent stained glass window set in front and a conical crystal glass chandelier above. Strains of Joe Cocker played in my mind’s ear, singing “Luxury You Can Afford.”

You, too, can own a mansion in Bramwell. I’ll surely miss Blacksburg, but I want to move to Bramwell, West Virginia. And live in a mansion. One potentially positive part of the economic development puzzle in the coalfields is the low cost of housing. The international economy is spawning countless new jobs that can be done anywhere in the world there is a laptop computer and good Internet service. You can own a mansion in southern West Virginia for half the cost of a bungalow in Seattle or San Jose. And there’s no traffic.

THE ABOVE ARTICLEs is an excerpt from the book Chasing the Powhatan Arrow, a Travelogue in Economic Geography by Michael Abraham. In it, Abraham traces the route of the famous Norfolk & Western passenger train from Norfolk through Roanoke and across the southern reach of West Virginia from Oakvale (Mercer County) through stops in Bluefield, Welch, Williamson, and Kenova into Ohio and terminating in Cincinnati, discussing the history, culture, geography, and especially the economy of this fascinating, varied corridor.  Chasing the Powhatan Arrow, a Travelogue in Economic Geography is published by Pocahontas Press and is available on the author’s website at http://bikemike.squarespace.com/chasing-the-powhatan-arrow/ and on Amazon.com.