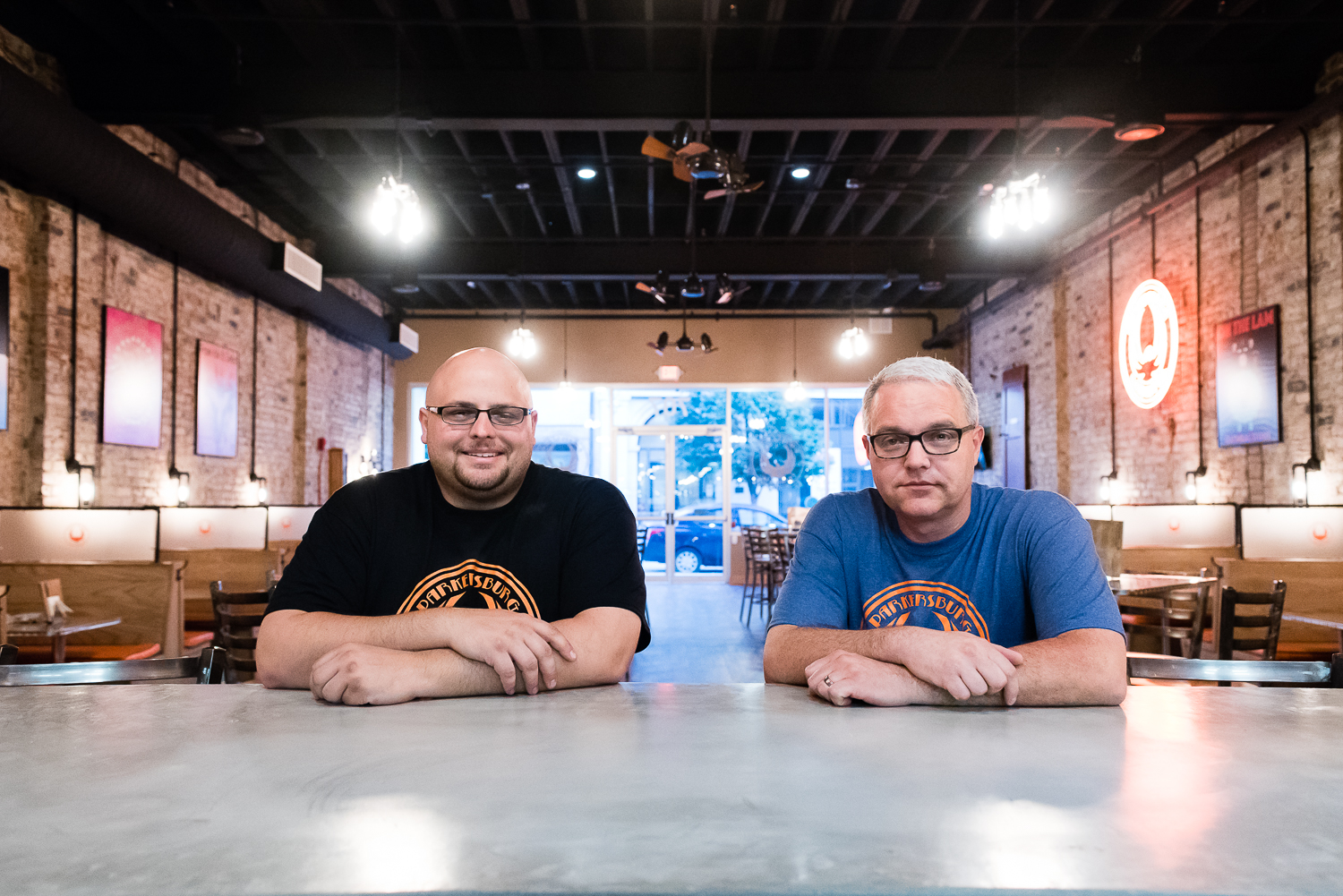 Flappers, fast cars and wild youth defined the roaring 20s. In an age of prohibition, a cool cat and his dame had to go to a speakeasy where secret doorways and passwords hid the world of gin and jazz. Today, a whopping good time can found right in the Mid-Ohio Valley. I’ll even tell you the password: The Parkersburg Brewing Company. First located on Marrtown Road, the Parkersburg Brewing Co. opened in 1864 as the Hebrank and Rapp Brewery. It was not until German immigrants John Hebrank and Marcus Rapp outgrew their Marrtown location that they built a new brewery on 7thStreet and incorporated the Parkersburg name. In its heyday, the company produced 60,000 barrels of beer a year. The brewery closed in 1912 due to the prohibition movement. Before the building was demolished in June 2004, it was used as a car dealership and cola bottling plant. The Parkersburg Brewing Co. name is now revived thanks to owners Dan Curtis, Jim Hopkins, Justin Logue and Walt Owens. The team opened their doors at 707 Market Street in Downtown Parkersburg on Sept. 17 of this year. Mountaineer blood truly runs in these West Virginia boys’ veins, because it is their mission to promote small business and provide the best taproom experience. For Logue, a love of craft beer began while attending West Virginia University. That love slowly grew into a want to brew it. After moving back to Parkersburg, he founded the Infamous Parkersburg Alers (a homebrew club). It was through the Alers that Logue met his business partner Curtis, and the rest is history.

“Separately we had our own dreams and visions for a brewery, and pretty soon, we realized we could join forces and really make a run at it. We want to put downtown Parkersburg on the path to greatness once more by offering a place that is unique and different,” Logue said. Unique it is. Upon entering the brewery, you are met with the big band sounds of Benny Goodman and the Glenn Miller Orchestra bouncing off the exposed brick walls. All this, coupled with the rugged pipework and soft wood accents, the building has a warm industrial atmosphere. The space is perfect for the New Year’s Eve and St. Patty’s Day parties planned. However, the décor is only a part of the reason customers love the Parkersburg Brewing Co. Your taste buds will tingle with the distinct flavors this group of experimenters have crafted. One of their top sellers is the Hip Hef – a beer that mixes traditional German malts and yeast. Pushing the boundaries of Pale Ale is the Palooka. It is infused with a biscuit malt that not only gives the brew character, but also makes the finish a little sweet. Rounding out the six beers on tap is the Cell Block 304. You want to talk about breaking the law? Well, you better have bail money for this Brown Ale. Earning the “dark horse” title, the Cell Block has bitter hops that are balanced with orange blossom honey. “We love to push the limits in everything we do. When you take a swig of one of our signature brews, you’ll be able to taste the time and tender loving care that went into creating the perfect recipe,” Logue said.

While you are sipping on a Hip Hef, be sure to order the Bavarian Pretzel Bites with the homemade Palooka Bier Cheese. Speaking of cheese, The Big Cheese Panini is sure to tickle your fancy as well. If anything else, savor one of their pepperoni rolls – you are in West Virginia. So, close the door on prohibition, and open the door to the Parkersburg Brewing Co. It is sure to bring a swing back to the downtown area.

Rebecca is a Mineral Wells native attending WVU Parkersburg. By studying public relations, she hopes to one day use her skills to benefit non-profit organizations in the Mid-Ohio Valley. Even though Rebecca loves the written word, she has a passion for history. You can find her digging through postcards at any antique store or giving tours at The Castle of Marietta.