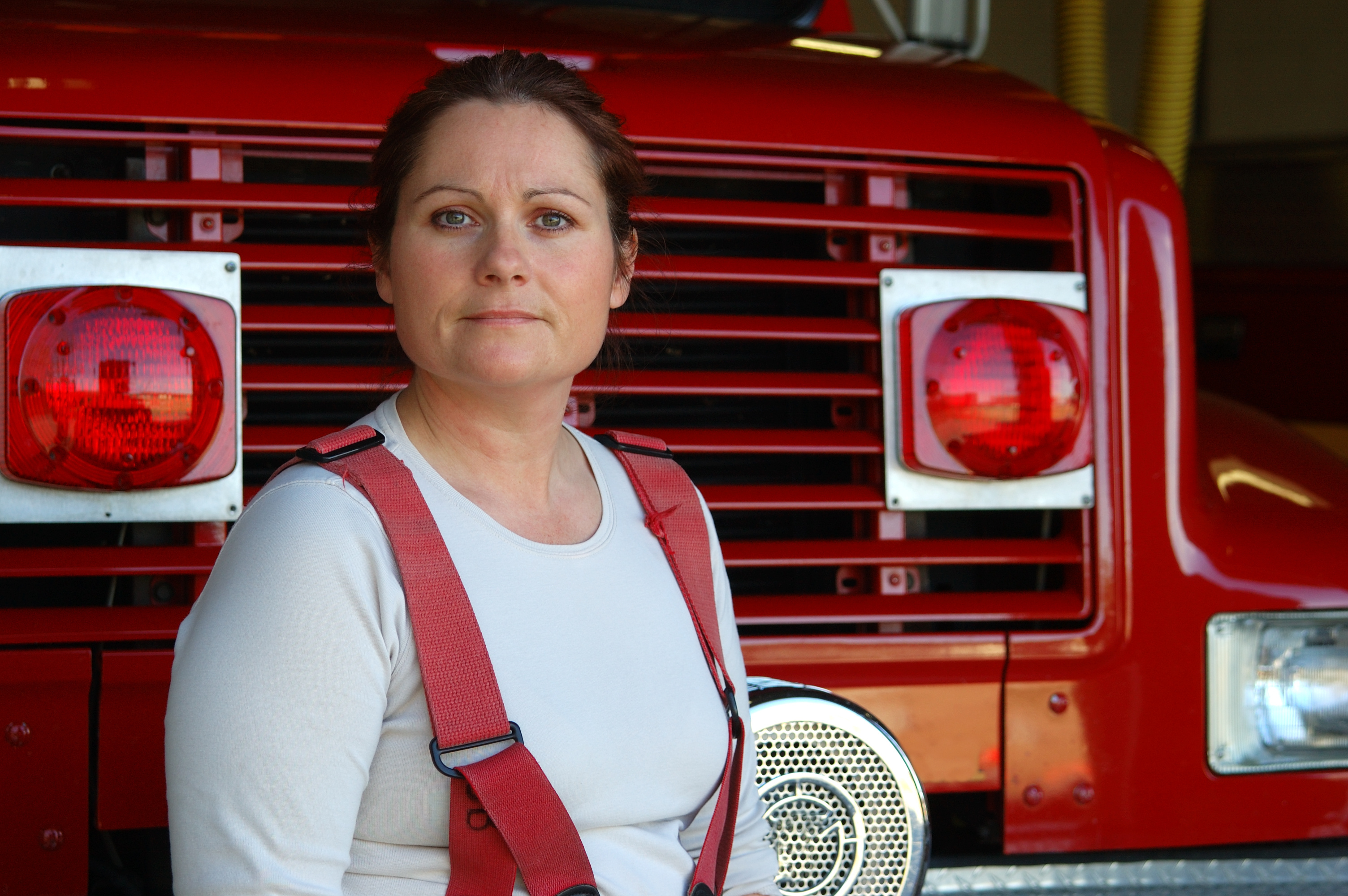 Firefighter Risks Her Life to Save Others

Firefighter Davina Clayton Risks Her Life to Save Others

Other stories in the series can be found here

“You have to have some ability to take risks. You have to take risks in a safe kind of way to where you are willing to put yourself out on the line to save a life. If you have a victim who has no chance of survival, you cannot allow yourself to be a hero by putting your family through the loss of you. If you come into a burning building and that room is fully involved (in fire), more than likely, the victims are already in eternity. There are firemen in this industry that would (enter anyway).”

I said, chuckling nervously, “Most people I know run out of burning buildings. You run in.”

“It is a different ball game when you run into one,” she said. “Even a building you have been inside before seems completely different when it is on fire. We recognize that every time we do this might be the last time. People are frantic, both those inside and outside. There is stuff all over the place. There may be pets. You have no idea what you are going to encounter. And we do it anyway. Any more, I don’t even think about it.

“I do pray. When we get calls, I pray from the time I leave my house until I get here to the station. I pray that God gives us the knowledge and the ability to deal with what we have to deal with and to give us the mindset with whatever we may see to make our minds as mirrors to reflect the bad stuff as we do our jobs. It is much like what a soldier experiences. It is much like war and PTSD.”

I asked about people migrating in or out of the area. She said most of the people moving in had grown up there and moved away and were now coming back. He said many of the new people without ties to the area were there to deal drugs. Most people who join the department are related to a current member. But they welcome anybody to join. “When someone has joined, but we’ve gotten a bad vibe, we don’t let them stay,” she said.

I asked the two of them about the worst traffic accident they can remember.

Victor said, “There was a multiple fatality car accident that was hard on me. Four dead kids on the curve up on the highway. The adults were probably drinking that night. They were likely going over 90 mph when they came around the curve. I was one of the first people up on that scene. One child was already dead. One was lying in the middle of the road. One was screaming, still in the car. I asked myself, ‘What are you going to do?’ There were so many people. It was a summer night, after 12:30 at night. Weather was not a factor and only one car involved. My mind just went crazy. It was about six years ago. Only one person survived.”

“How do you guys deal with something like that?” I asked. “Do you just get up again the next day and do whatever needs to be done all over again?”

“You let it go, and then you go do it again,” Victor agreed. “When you run one like that, you never forget it. It sticks in the back of your mind forever.”

“It always walks behind you,” Davina added. “They are like a little shadow. They don’t bother you; they just walk behind you. They are always there. For a female doing this, it is a bit different. When I am on the scene, I am always all about getting the job done. But when I go home, I cry. In letting that emotion out, right then and there, I am putting it where it needs to go. Then I am fine.

“The one that got to me the worst was a girl that got killed when she flipped her Hyundai Tiburon on that same stretch of superhighway. She was a Virginia Tech student coming back from spring break. It was a white car.

“She drove her car off the road into the median. The drain channels are steeper than they look. They will send your car airborne like you will not believe. She was not wearing a seat belt. When her car rolled over, it threw her head into the sunroof and the glass shattered against her head. It rolled her around in her seat. The impact broke her back and when we got there, she was in a back-bend half-way outside her driver’s side window. The car landed back on its wheels. She was already dead. The car flipped so fast that almost everything just rolled and set back down in its place. She had just been to Wendy’s. She bought a baked potato with sour cream and chives on it. It was still sitting in the console between the front seats. She had took a bite and had set it back down. When she looked up she’d run off the road. I doubt it ever moved.

“Her purse came out of the car and flipped as it rolled. Everything came out. Lip gloss. Checkbook. Compact. There was a little teddy bear, about this big. No doubt she’d had that teddy bear since she was a kid – missing an eye, tattered and torn with a tail that had been re-sewed back on. This was about eight years ago. You never forget.

“It started to pour the rain. We had to wait for a Medical Examiner from Beckley. Two hours. The victim was still laying with her back broken, half-way out the car. We covered her with a sheet; we are big in the dignity of death. I’m setting there in the truck right behind her car. And I’m setting there and setting there and setting there. It was daytime. I said to my chief at the time who was sitting with me, ‘I can’t leave her stuff out there to get wet.’ He said to me, ‘Davina, you can’t touch nothing.’ I said, ‘I am not letting her stuff get wet.’ I said, ‘I’m a momma and I can’t let her stuff get wet. It’s her purse. It’s her personal stuff. Her mommy will want those.’ I got out in the rain and I got her stuff. I was smart about it; I piled it in order by the way it came out of that purse. When I got to that teddy bear, I lost it; I just bawled. I stuck it down inside that purse and I zipped it and I got back up in that truck and I set it down. He said to me, ‘You know, you’re going to get in a lot of trouble for doing that. You know that the M.E. has to take pictures of that purse and its content where it landed.’ I said, ‘Let them fine me; I don’t care. That dead girl is somebody’s baby.’

“The M.E. got on scene, a female. The rain had stopped. I talked to her and told her about the purse and what I’d done. I took her to the truck and gave it to her. I laid the dead girl’s personal items back on the ground where I’d gotten them so the M.E. could take pictures. The M.E. said to me, ‘Davina, pack that girl’s stuff back up. You’re fine. Don’t worry about that.’

THE ABOVE ARTICLEs is an excerpt from the book Chasing the Powhatan Arrow, a Travelogue in Economic Geography by Michael Abraham. In it, Abraham traces the route of the famous Norfolk & Western passenger train from Norfolk through Roanoke and across the southern reach of West Virginia from Oakvale (Mercer County) through stops in Bluefield, Welch, Williamson, and Kenova into Ohio and terminating in Cincinnati, discussing the history, culture, geography, and especially the economy of this fascinating, varied corridor.  Chasing the Powhatan Arrow, a Travelogue in Economic Geography is published by Pocahontas Press and is available on the author’s website at http://bikemike.squarespace.com/chasing-the-powhatan-arrow/ and on Amazon.com.