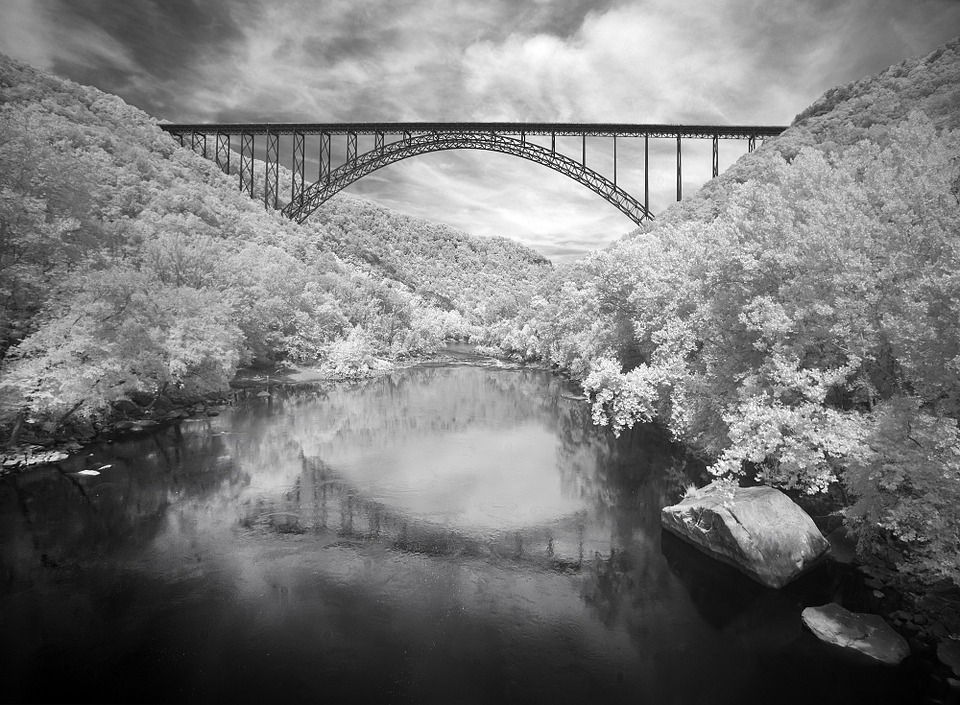 Captain Ron’s long ponytail stood straight out in the wind as he gunned the jet boat and turned the wheel of the craft hard to the right, sending up a spray of New River water and a yelp from his energized passengers.

Before the tour was over, the boat would effortlessly make its way past the site of the worst industrial accident in American history, and then meander upstream to the famous New River Gorge Bridge.

Captain Ron would tell us about the several lives lost on Bridge Day over the years when people legally and willingly jumped off the span with nothing but a nylon chute to save their lives, but never uttered a word about how scores of men died carving a three-mile tunnel through nearby Gauley Mountain.

We were on a tour of the New River Gorge from the foot of Hawk’s Nest State Park near Gauley Bridge, West Virginia. For the most part, Captain Ron kept us on a straight, gentle, leisurely paced course, careful of his wake so as to not disturb the occasional fisherman or unnecessarily jostle the fragile wooden docks that bobbed in front of the otherwise inaccessible fishing camp structures that dotted both sides of the wide river. He obviously knew this stretch of river and expertly maneuvered the powerful boat that had open sides and six rows of seats for paying customers.“They used to give me a ticket for driving like this,” he yelled over the sound of the powerful engines. “Now they pay me for it.”

We found our way to Captain Ron’s care after having descended from the Lodge at Hawk’s Nest State Park by way of a long, scenic, enthralling tram ride down a steep mountainside. The small tramcars only swayed a little as they conveyed passengers up and down the mountain.

Captain Ron took us over smooth waters to a point where the tunnel that had been cut through the imposing Gauley Mountain 86 years ago could be seen. He called our attention to the structure but did not utter a word about the haunting tragedy involved with its creation. Instead, he spun the boat around and headed upriver to the main attraction – the New River Gorge Bridge.

He kept the boat as stationary as possible just short of the white water that kept us from passing directly beneath the famous structure where, once a year, BASE jumpers – BASE stands for building, antenna, span and earth – are permitted to jump off the span of their own free will with special parachutes.

After giving his passengers plenty of time to snap pictures and take in the bridge view, Captain Ron gunned the boat to take us back to the dock and maneuver under a massive rusted railroad bridge that we thought for sure had been abandoned until a long noisy freight train passed right over our heads.“They jump on Bridge Day every October since 1980,” Captain Ron explained. “They’ve only lost three people in all that time and they say that up to 100,000 people walked the bridge on Bridge Day last year. Of course not all of them are jumpers.”

We docked, disembarked, and Captain Ron tipped his sweaty worn baseball cap in a farewell gesture. There was still no mention of the disaster that occurred just a few hundred yards downstream when desperate men risked life, limb and lung to feed families and work through the Great Depression.

It’s been called America’s worst industrial disaster and the tragedy carries ugly overtones of racism, disposable lives, and the traditional rape of West Virginia by out-of-state barons of industry.

Men facing the challenges of finding work responded. Two thirds of them were African Americans. They joined others who were struggling in the dreadful economy. But they were never told that the mountain consisted of 99.44 percent silica and they were never given equipment to protect themselves against breathing the dust that would ravage lungs and kill indiscriminately.A company called Union Carbide needed more electricity for its operations at Alloy, West Virginia. It came up with a plan to divert the New River through Gauley Mountain so hydroelectric facilities could generate power to feed the needs of the industrial giant. It put out the call for men to work the drills and other machines that would cut a path through the mountain.

They began to die from accidents first. They fell from scaffolding and were crushed by equipment and rock falls. Then, after about two months, the sickness cut through their ranks and the bodies began to pile up.

It took about two months for the men to begin dying from agonizing painful sickness. Fibrous nodules began to grow on their lungs from inhaling the silica dust. A company doctor told them they just had “tunnelitis” and gave them worthless pills. A nearby newspaper began to investigate and a local judge slapped a gag order to keep the situation quiet.

Most appalling was the handling of the dead, especially the African Americans. Betty Dotson-Lewis wrote an account of the situation on a site called “Tunnel Talk”:

Directly, a problem arose as black workers died. There was no “colored” burial site. Handley White, local funeral parlor owner in Summersville, located a field on his mother’s farm and was given a contract to open a burial ground on the Martha White farm in Summersville. Handley was paid $50 per body with the promise of “plenty of business.”

The dead workers were stacked in rows and strapped on the back of the flatbed truck. More of the dead black workers were put in an upright sitting position as if they were alive for their ride to their final resting place. For years rumors spread about workers buried in mass graves on the Martha White farm, but White family members deny this accusation.

The tunnel was eventually completed and has functioned as intended ever since. There are no books in the Hawks Nest Lodge gift store about the tragedy. There is no obvious marker at the site.  The amiable Captain Ron understandably focuses on entertaining tourists and keeps the mood light while on the water. There is just a brief historical marker that tourists speed by out on the main highway.

Meanwhile, like the memory of the estimated 750 men who died drilling that tunnel, Hawk’s Nest State Park seems to be fading away. Its lodge has become dingy and sparsely occupied; its trail down to the spectacular overlook of the mighty New River is broken, unkept and treacherous; and its state employees seem sullen and downcast.

“Isn’t nothin else goin on around here since the mines closed,” said one young man who helped us get ready for our tram ride. “This is all I got and it only pays minimum wage.”

West Virginia’s economy, once driven by a coal industry that many thought would never falter, has felt the sting of demise. The closure of mines that once kept the region’s economy humming has taken its toll on tax revenues and the state’s traditionally delicate budget. Clearly, the state is no longer investing in keeping this park in peak condition and there seems to be a cloud over the operation.

If there are ghosts of the workers who died here, they remain as silent about their fate as the dwindling number of people who work here.

No doubt, the tram and the jet boat will continue as long as the tourists come and the profit margin remains attractive. But the fate of the site as a state park may be as in doubt as the survival rate was among the many men who once tried to support their families by drilling through a mountain of silica.