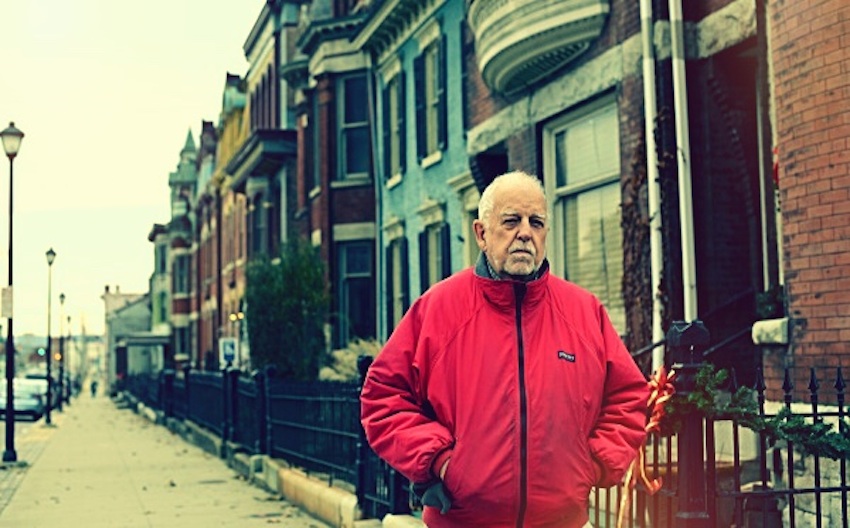 The Whores, The Help, and the Hooligans

It seem truly strange to me today to put myself back in the early 1940s, when I was barely in my teens.  The attitudes and mores that made up the culture of those times seem unreal in today’s world, but real they were. Sadly, they have been largely undocumented for future generations.

We had a section of Wheeling that was marked off by a natural boundary — “south of the creek” — which had a different set of laws. It was very heavily populated with saloons which openly offered illegal liquor, gambling, and women. There were houses of prostitution everywhere, even in the alley behind Saint Alphonsus Catholic Church. The houses were accepted as part of the fabric of life. Private homes had small enameled metal plates with “Private Residence” attached to their doors so drunks wouldn’t pound on the doors at all hours of the night seeking admittance. Whereas the town north of the creek, where the shopping was located, was run according to the laws of the community and was very proper, the south end was “wide open.” 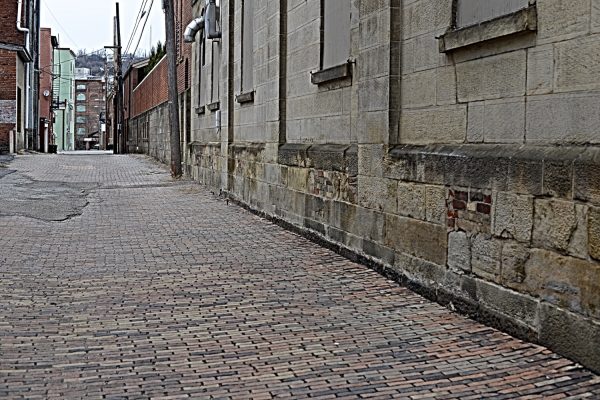 The alley behind St. Alphonsus as it looks today.

I was raised “out the pike,” which was where the “rich” people lived according to the town folks. Most lived in houses with front and back lawns and garages for their automobiles. But liberally sprinkled about the county were the the baronies and estates of the truly wealthy. The upper classes were defined, that is, upper, middle and the lower-middle class, not only by the size of their homes but also by the number of servants they employed.

Most of the homes had “help,” or maids who performed the heavy housework and took care of the children. They lived in with their employer families and were paid $7.00 a week plus room and board with Thursdays off. The members of the Fort Henry Club and the Wheeling Country Club, the most exclusive clubs in the city, resided “out the pike.” These clubs were prosperous, with memberships from the the steel, tobacco, canning, and banking interests, as well as the professional class i.e., the doctors and lawyers as well as a very prosperous bourgeoisie for the use by their executives. The dues and bills were tax deductible in those days. In addition to memberships the revenue was enhanced by the take from slot machines. The prosperity of these clubs made for some very subtle but strong discrimination. No Jews, very few Catholics and, of course, the only blacks were the help dressed up in the starched uniforms of their particular stations.

“Out the pikers” knew of the underbelly of the town because the saloons and “houses” were raided on a regular basis, reported in the paper, and fined $100.00 and costs of $6.00. They were never shut down, and the fines became a planned cost of doing business. The city used this income to balance the budget. It also served to salve their consciences that the laws were apparently being enforced. 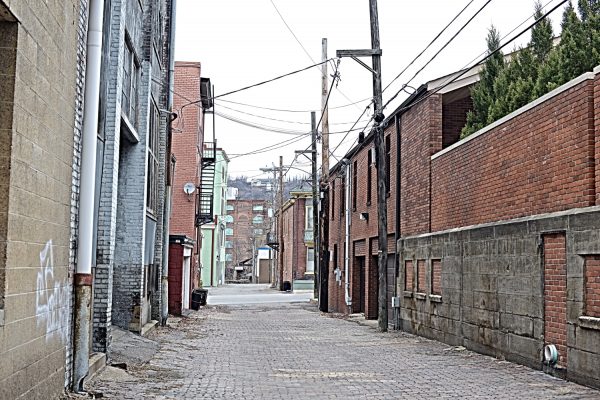 This old alley hasn’t always been so sleepy.

This arrangement evolved among the mill owners, those “out the pike,” and the laboring class “south of the creek” as an unwritten covenant. The labor for the mills was provided, and in exchange they were permitted to have their entertainment. And it was not uncommon for the gentry to partake in the fun also. The area was extremely safe because it was not only patrolled by city police (the state police were told to stay out) but customer safety was further guaranteed by the proprietors of these establishments, especially the operators who ran the big games that attracted gamblers from far and wide. These patrons had to feel that they could get any winnings home safely. There was a “black and tan” section south of the creek, and my brother Jim was “rolled” going into the alley approach of Tootsie’s. After he collected himself, he went into Tootsie’s and told him he wanted his wallet back. Tootsie set him up with a drink and his wallet reappeared intact within 20 minutes.

My initial interaction with “the cat houses,” “the Tenderloin,” “the Strip” or “23rd street” was when I was 15 or 16. We, that is the boys and I, had been cruising in my mother’s car. We were on our way to Oglebay Park early in the evening by way of “skunk hollow” road, better known as Waddell’s Run Road when we hit a skunk. It was a hot and muggy night, and it smelled to high heaven.

Tommy Vogel picked up the carcass by the tail and we tied it to the rear bumper, leaving a wake of unpleasant odor behind us. We had great fun driving through town fumigating all the poor souls standing on the streetcar islands waiting for their trolleys. Then someone came up with the idea of throwing it into a whore house. The famous one on the alley corner behind the Pirate Café on 23rd street was selected as the target. Tommy Vogel, who had a great arm, positioned himself at the bottom of the front steps and someone went up on the porch and knocked on the front door then stepped aside. When the door opened Tommy winged the dead skunk into the whore house, and I want you to know that our vocabulary of cuss words was increased exponentially! We all ran for the car because we knew they would call the police, and we drove madly to get out of the area. It went down in lore as the night “we threw the cat into the cat house.” 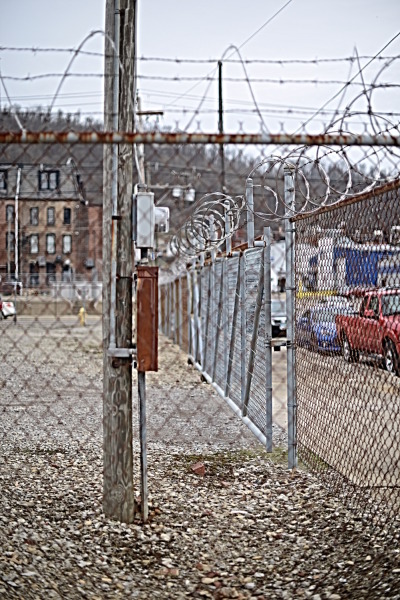 The Pirate Cafe, like most of the buildings in this story, has been reduced to a vacant lot.

As I mentioned before, I lived out the pike where Triadelphia High was the logical school for me. However, I was Catholic, and Bishop Swint told all the parents that if they sent their children to public schools, they could not receive the sacraments. So I went in town to Central Catholic, which at that time was a boys’ school. The vast majority of the boys were from the “working class.” It was difficult for me in the beginning. I have always said that is when I learned to talk and run fast.

I made easy friends with some of the boys from town- Tommy Klug, Don “Little Dubie” Dailer, Joe Nemith, Pinky Manners, and others. Occasionally, I would hop a bus after dinner and go into town to hang out with my school buddies, especially in the summer during the long days. Don’s was a hangout. He had two older brothers, Jim, who was known as “Big Dubie,” and Ed, who played football. They were good athletes and had a sister, “Ducky,” who was really cute. They lived in a “train” apartment on the first floor, and I spent a lot of time hanging there talking with Mr. and Mrs. Dailer and lots of others. Their apartment was situated on the corner of Chapline and 23rd streets in the heart of the “Tenderloin.” Mrs. Dailer was a mother and housewife, and Mr. Dailer worked at Wheeling Steel in the headquarters building just off 12th street on Market. He walked to and from work. The nightly activity seemed to occur on a different plane from their lives. They were really good people.

Fast forward, I am at Saint Francis Preparatory School in Spring Grove, Pa. While at Central, I had been thrown out of chemistry and second-year of French, and although I graduated, I needed these credits to gain admittance to Notre Dame, my father’s alma mater. My dad had often told me, “Bill, you can go to any college you want as long as it is Notre Dame!”

We had the same six kids at our table for all our meals at Saint Francis. We exchanged information about our families and our hometowns and became good friends. I suggested that they come and visit me. They wanted to know what we did for fun, and I told them we played a lot of basketball, some softball, took girls to dances at the Pine Room, and occasionally hung out at whorehouses and listened to records. “You do what!!!!” They exclaimed, really shouting.

I guess I was really naive in that, until that moment, I believed everyone grew up like everyone else. I explained that on hot summer evenings when there was nothing going on, Don would take us over to his neighbor’s house where we were welcomed, given free Cokes, and we could listen to records of the latest hits on the jukebox without putting coins into it. This was big stuff because we learned the words to all the songs that were on the “Hit Parade” on Saturday night. When darkness came and the johns would start to come, the madam would kick us out. It just seemed like something to do, although I didn’t tell my parents about it.

Everyone broke the laws concerning liquor by the drink. There were bookies, card games, caged dice everywhere in town, and, of course, the big barbut (Turkish dice) game at the Pirate Café. The “ladies of the night” worked only the bars and in the houses “south of the creek.” I remember the manager of one of the most popular gambling joints south of the creek testifying at a crime hearing: “We’re just like the country club, only we ain’t got no golf course.”

Today, I realize how lucky I was in my education. I enjoyed an idyllic home and family life. The good nuns, Sisters of Divine Providence, and the Marist Brothers in high school, literally and lovingly pounded the course information into us. At the same time I learned about life on the other side of the tracks in the “school” of life south of the creek.