Deprecated: Return type of Requests_Cookie_Jar::offsetExists($key) should either be compatible with ArrayAccess::offsetExists(mixed $offset): bool, or the #[\ReturnTypeWillChange] attribute should be used to temporarily suppress the notice in /var/www/html/vandaleer/wp-includes/Requests/Cookie/Jar.php on line 63

Deprecated: Return type of Requests_Cookie_Jar::offsetGet($key) should either be compatible with ArrayAccess::offsetGet(mixed $offset): mixed, or the #[\ReturnTypeWillChange] attribute should be used to temporarily suppress the notice in /var/www/html/vandaleer/wp-includes/Requests/Cookie/Jar.php on line 73

Deprecated: Return type of Requests_Cookie_Jar::offsetSet($key, $value) should either be compatible with ArrayAccess::offsetSet(mixed $offset, mixed $value): void, or the #[\ReturnTypeWillChange] attribute should be used to temporarily suppress the notice in /var/www/html/vandaleer/wp-includes/Requests/Cookie/Jar.php on line 89

Deprecated: Return type of Requests_Cookie_Jar::offsetUnset($key) should either be compatible with ArrayAccess::offsetUnset(mixed $offset): void, or the #[\ReturnTypeWillChange] attribute should be used to temporarily suppress the notice in /var/www/html/vandaleer/wp-includes/Requests/Cookie/Jar.php on line 102

Deprecated: Return type of Requests_Cookie_Jar::getIterator() should either be compatible with IteratorAggregate::getIterator(): Traversable, or the #[\ReturnTypeWillChange] attribute should be used to temporarily suppress the notice in /var/www/html/vandaleer/wp-includes/Requests/Cookie/Jar.php on line 111

Deprecated: Return type of Requests_Utility_CaseInsensitiveDictionary::offsetSet($key, $value) should either be compatible with ArrayAccess::offsetSet(mixed $offset, mixed $value): void, or the #[\ReturnTypeWillChange] attribute should be used to temporarily suppress the notice in /var/www/html/vandaleer/wp-includes/Requests/Utility/CaseInsensitiveDictionary.php on line 68

Deprecated: Return type of Requests_Utility_CaseInsensitiveDictionary::getIterator() should either be compatible with IteratorAggregate::getIterator(): Traversable, or the #[\ReturnTypeWillChange] attribute should be used to temporarily suppress the notice in /var/www/html/vandaleer/wp-includes/Requests/Utility/CaseInsensitiveDictionary.php on line 91
 Caridi Authors, Releases His First Children’s Book – Vandaleer
Home
Happenings 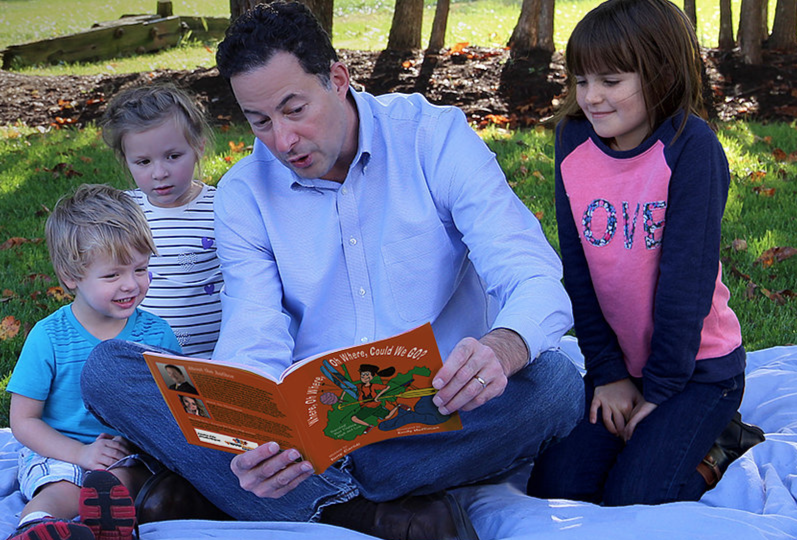 They called it the “slow” reading group in the grade school Tony Caridi attended in Lockport, N.Y., because, in the late 1960s, teachers were permitted to make such references and segregations.

There was Group 1 with the gifted, and also a Group 2 with the average readers. Caridi, then a first grader, was assigned to the third circle.

“That was at a time when the teachers were allowed to separate students in school based on reading skills, and, yes, I was in Group 3, and that was the group of students that did not read that well early on,” the sports broadcaster and writer admitted. “I was the third of three kids, so it could have been because I was just letting everyone else in my life do it for me. But I was slower to get it, but by the time I was in second or third grade, off I went.

“I do remember, though, that initially I was a little bit behind, and I had to do some work to catch up,” he continued. “And now, of course, I am in the word business with what I do for a living, and I am always learning the craft.”

Caridi now has expanded his resume to include “author” with the release of “Oh Where Oh Where Could We Go,” a children’s book that travels the state of West Virginia with every turned page — Spruce Knob, New River Gorge, The Greenbrier Resort, Oglebay Park, and the Capitol Theatre.

Caridi credits his appreciation for everything published by Dr. Seuss during his childhood for not only helping him with his reading, but also for the style in which he composed his first book.

“Like a lot of kids growing up, I was captivated by the words and the illustrations. I think those are things that just stick with you. Maybe they don’t for every child, but they definitely did for me,” he said. “Even as I have gotten older, I still consider those books to be magical. That man had an unbelievable talent for what he was able to do. That’s why, when I had the opportunity to do this book, I wanted it to be bouncy and I wanted it to rhyme so kids would have an enjoyable time reading it.

“I don’t think there’s one of those books that I can say is my favorite because I really enjoyed them all, and I was very lucky to have those as a child,” Caridi explained. “It was all about the characters and the images, and I’ve also read a lot about Theodor Geisel and that whole world that he was in and how his brain worked. The stories he created, and in some cases his creation of words, are what have always intrigued me about Dr. Seuss.”

During the years his three sons, Michael, Andrew, and Matthew, were in elementary school, Caridi’s wife, Joan, assisted with coordinating a read-along program, and she often employed Tony for many of the programs. Those experiences, he explained, played a primary part when deciding how to tell the story in “Oh Where Oh Where Could We Go.”

“We did read aloud to our boys at home, too, but when she started coordinating that program for the school, she would send me there to read to the students, and those kids always got all fired up,” he recalled. “They sat in there, and they were laser focused. I always told Joan that I wanted books to read that rhymed that I could read really, really fast because the kids loved when you rhymed, and it was fast.

“One of my go-to books other than Dr. Seuss then was one called, “Possum Come A-Knockin’, and I read that thing about 90 mph, and the kids would just get giddy. So, I’ve always thought it was really fun; it helps in so many different little ways, and the kids really bought into it, and it was a good time in their lives to let them know that reading can be really fun,” Caridi said. “So, when I had this chance, I decided to write a children’s book because of those experiences.”

Caridi first arrived in the Mountain State in 1984, and today every fan of Mountaineer football and basketball is very familiar with his voice and his play-by-play abilities. He initially gained employment with WAJR-AM thanks to winning a coin flip, and he’s been in the state ever since. Today he is employed by both the Mountaineer Sports Network and West Virginia Radio Corporation’s MetroNews Radio Network, is the host of Statewide Sportsline, and also is employed by Pikewood Creative as the video production company’s director of business development.

And today, this graduate of Syracuse University’s Newhouse School of Public Broadcasting is a West Virginian, and “Oh Where Oh Where Could We Go” is a perfect example of that fact.

“I think West Virginia is an extremely special place, and I believe that one of the things that we haven’t done collectively is a good enough job of letting people know what the real West Virginia is,” Caridi explained. “Everyone always has perceptions, and I think we need to start from within to let the people who are here know that they are living in a very special place. Then, the next level to that is that we need to do a better job of telling other people what is so special about our state.

“When you go to other places that also have a lot of scenic beauty like West Virginia, I think they do a better job with that. That’s not to say that we can’t do that. We just need to do a better job of telling other people what the real West Virginia is,” he said. “Once they find out and come here, they will quickly agree with us about the beauty, and then they will discover so many other things here that are very unique and very beautiful.”

The State Capitol in Charleston. The Cass Railroad. Summersville. Snowshoe. Lewisburg. The Hatfield and McCoy Trails.

“And if I were to include every special place we have here in West Virginia, I would have had to write several more editions. But we didn’t want to overload it, and obviously we’ve missed a ton because there’s just so much,” Caridi said. “But the book does cover all the corners and areas of the state, and I do believe it truly gets the point across about how many attractions there are in West Virginia.”

An important part of any children’s book involves the illustrations, and discovering an artist in West Virginia was important to Caridi because of the real feel a resident understands from living in and traveling around the Mountain State.

“I am really thrilled with the illustrations by Emily Huffman,” he said. “Emily had drawn a picture of our family with the family dog, so I knew how talented she was when we were looking for artist. When we were in the process of asking around about who could illustrate this book, and I really did want to find someone in West Virginia because I believe it was important for that person to know our state, she came to my mind.

“I sent her some copy from the book and asked her if she would be willing to come up with some ideas for the illustrations, and they came out great,” Caridi said. “And when Michael Teal, who is an artist himself, agreed to walk her through the process, I thought it was the perfect marriage. As a result, it came out just great. We’re all very happy with it.”

Pre-sales for the self-published children’s book began this past Thursday on Caridi’s Website, TonyCaridi.com, and the finished product is expected to arrive during the first week of December. That is when Caridi and his helpers will begin mailing his very first children’s book to those who purchased it, and that is also when it will appear in small bookstores around the state.

Each book is priced at $15 and comes complete with an audio version, and a portion of the proceeds will be donated to WVU Medicine Children’s.

“The goal is that the books will be available to us by the first week of December, and that is why we started taking pre-orders this week. Once the books arrive, we hope to get them in the mail, and they will arrive within two or three days,” Caridi said. “We really want to get this out before Christmas so moms and dads and grandparents could include them as presents for their children and grandchildren.

“We will also have it in a few retail spots around the state, and I will be doing some signings for the book, too,” he said. “I know there are a couple of signings already planned for Charleston and Morgantown, but I would be more than happy to travel to any other areas of West Virginia as long as my work schedule allows that to take place.”