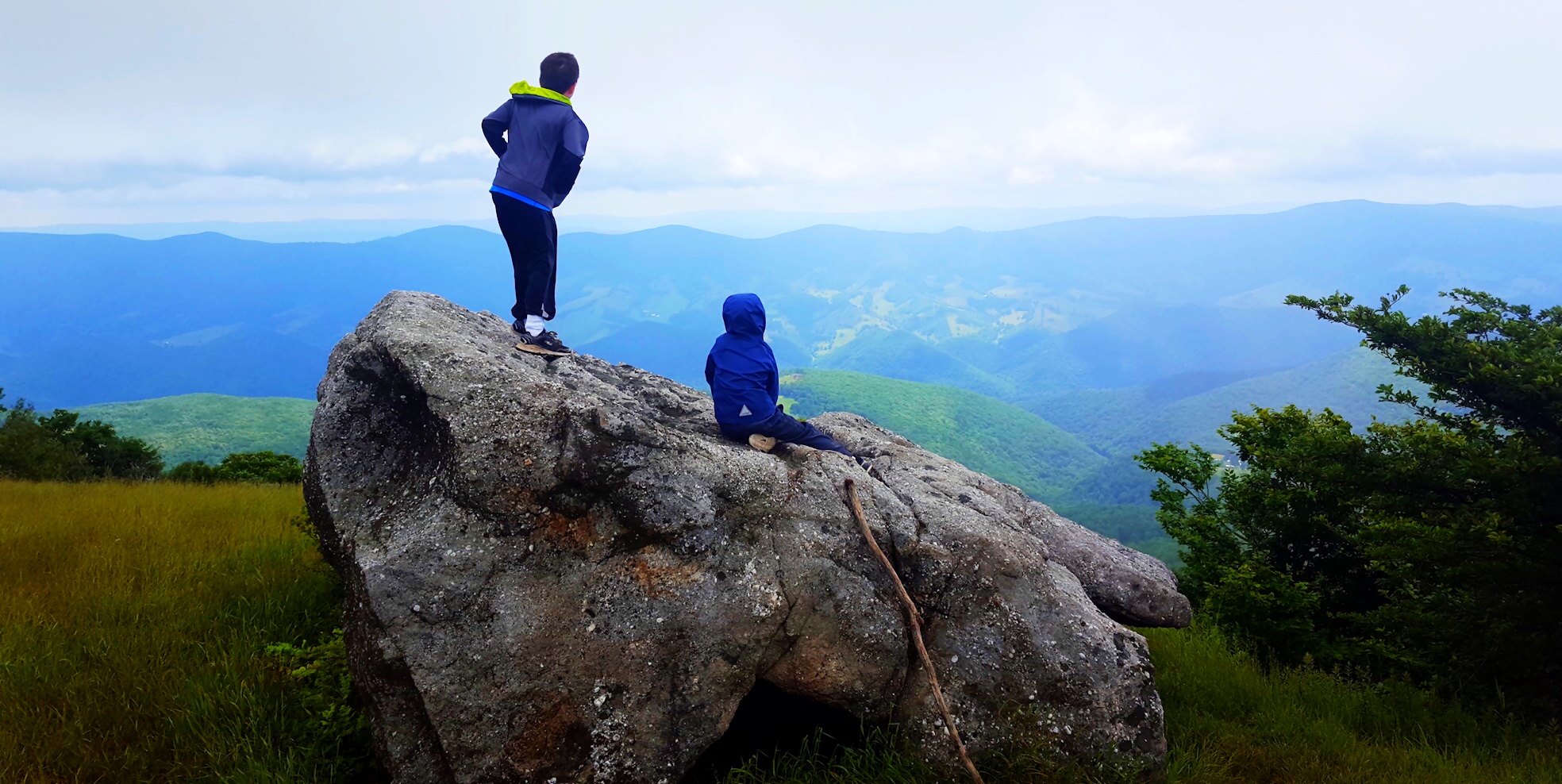 Benjamin woke up on the wrong side of the bed this morning. Several days of family fun in Tucker, Pendleton, and Grant counties have taken a toll on his six-year-old body, and he can’t quite keep up with his older brother, 10-year-old Andy. Though Ben hiked as far as his legs could carry him at Dolly Sods yesterday and climbed into the car at Smoke Hole Caverns this morning with enthusiasm, his attitude began to deteriorate halfway up the winding road to the summit of Spruce Knob. Now that we’re here, standing at the highest point in the Mountain State, I expect him to perk up when he looks out over the corduroy ridges and valleys of eastern West Virginia. I wait for him to inhale the scent of red spruce, to sigh it out as I do, and to find a place of quiet wonder as he peers off into the distance towards Virginia and Elkins.

Instead, he droops. “Can we go back to the car?” he whines. He’s queasy from the drive and sleepy from the Dramamine.

“Come on, Ben!” I shout over the wind. “This is the tallest mountain in West Virginia! Isn’t it beautiful? Can you see all those mountains out there? This is your home!”

Ben shrugs and allows me to pull him along the trail that circles the knob. We all clamber over rocks and down to an open meadow strewn with heavy boulders, perfect for little boys to scale. Andy scrambles to the top of each one, and when I ask him what he thinks he gives me the response that my heart needs to hear: “I love it, Mommy. This is the most amazing thing I’ve ever seen.” Together we walk to the edge of the meadow and stare out over the mountains, and I can feel him begin to fall in love with this place.

My husband interrupts our quiet moment.

“Ben’s hungry and miserable,” he calls from the boulder field. “I’m taking him back to the car.” As he helps our younger son up the hillside and they disappear into a spruce stand, I feel like I’ve failed at something.

I don’t know what my children feel on the observation tower on Spruce Knob or on Bear Rocks at Dolly Sods. I find such comfort here. Pound for pound and peak for peak, the Rocky Mountains are perhaps more impressive. But when I’m amidst these soft ridges, I feel more at peace than I have anywhere else in the world. While the high mountains of the west stir awe and excitement, the view from the roof of West Virginia gives me the feeling that I am of this place, and nowhere on earth engenders such a strong sense of belonging.

It’s difficult to describe a beloved place without venturing into cliché. The word, “contentment” doesn’t get its due credit because it doesn’t feel like it means all that much. In reality, contentment is perhaps the one emotion we should strive to maintain in the long-term. Happy is too difficult; happy is too hard to chase and too elusive when we catch it. Contentment should be the goal, the feeling that carries us through our years, wherever they are spent.

Contentment comes to me in the mountains. And, as I drag Benjamin along the hiking trail, I wonder if this hour here will mean anything to him. I’m an adult approaching 40 now, and I write about West Virginia as if it has always lived in this deep place in my heart. But really, that feeling grew out of a lifetime of experiences.

How many years—how many views—does it take to fall in love with a place? At what point, if I have done my job as a West Virginia mother correctly, will my children realize that they are infatuated with this land? When does that notion take hold? In hindsight, I like to imagine I’ve always loved it here, but this is not the case. Many summers my father tried to organize a West Virginia vacation, and my brother and I always shot him down in favor of a trip to Yellowstone or the Caribbean. We could never get excited about a journey through our state.

Instead, I think my time away from West Virginia made me love it. I went to college in Florida, and when I left Wheeling I didn’t look back. How could the foothills compete with a blue ocean and gentle manatees? I fell in love with Florida. It became my home.

But the thing about Florida is that it’s a scrub-land. The green of Florida is largely introduced; the native vegetation is short and coarse, the natural landscape brown and spiky. There’s no carpet of grass. And all of this is just fine because it’s Florida. The state is supposed to be scrubland and swamp. But after four years in Florida, its shine wore off, and I felt deeply homesick as graduation approached. Not for my family or my old life but for West Virginia itself. I missed the green, the land. My car, in those days, had a cassette player, and one day on a long drive I put in my tape of John Denver and played “Country Roads” over and over, for hours. Play, rewind, play, rewind. Instead of the long blade of unbending cement interstate stretching out in front of me, I pictured a two-lane ribbon of road darting in and out of the shade, winding its way through a deciduous forest. I tried to feel the soft brush of West Virginia grass against my skin. At times, I looked out the window and ran my hand over imaginary topography, remembering the way the treetop canopy waved in the wind, limbs moving in concert like Gulf rollers at the beach. It was the loneliest day I’d ever known. And though I’d had great plans to build a life in Florida, I decided then that I couldn’t stay in the scrubland too long.

How is it that we fall in love with place? With any place? We aren’t born loving where we land. In fact, many of us fly away as soon as the door is opened. Most of my high school graduating class has done so, gone to New York, D.C., or California. And yet, their departure doesn’t necessarily mean that they aren’t in love with West Virginia. It means only that they’ve chosen to make a life elsewhere. A beautiful mountain does not a successful life make. A hemlock forest does not content everyone. Nor did it always content me. In my youth, though the mountains were indeed a fun day on the river or slopes, they hadn’t yet grown into the marrow of my bones. But they did, as time passed and during my years in the south, until one day they were simply there, present, as a palpable ache. And now that I feel it, it can’t be ignored, and I cannot imagine a time when I will not be in love with this place, no matter where I live.

When I feel frustrated with West Virginia (and I do, often) I try to remember that day in the car as I frantically scanned a map to find a Floridian forest—any wild place—to quell my homesickness. I recall craving the smell of spruce and peat with wild desperation and instead breathing in only salt and tar.

I came home to West Virginia a year later.

It’s not always easy for me to live here. West Virginia needs to work on itself, to challenge both the misconceptions and the truths, the way we land at the bottom of every list and struggle as a community with our health, our economy, and our environment. Often, we take one step forward and two steps back. We’re getting there, but some gray days I think I might choose Florida. That is until I stand in these ancient valleys. And then I’m quite certain where I belong.

Back in the Spruce Knob parking lot, Benjamin gets a rest and a snack, and he perks up. I ask him if he would like to go back to see a view of the mountains again. He says no.

It’s okay that my son doesn’t love West Virginia yet.

Laura Jackson Roberts is a freelance writer in Wheeling and blog editor for Literary Mama magazine. Email her at LJackson513@gmail.com.