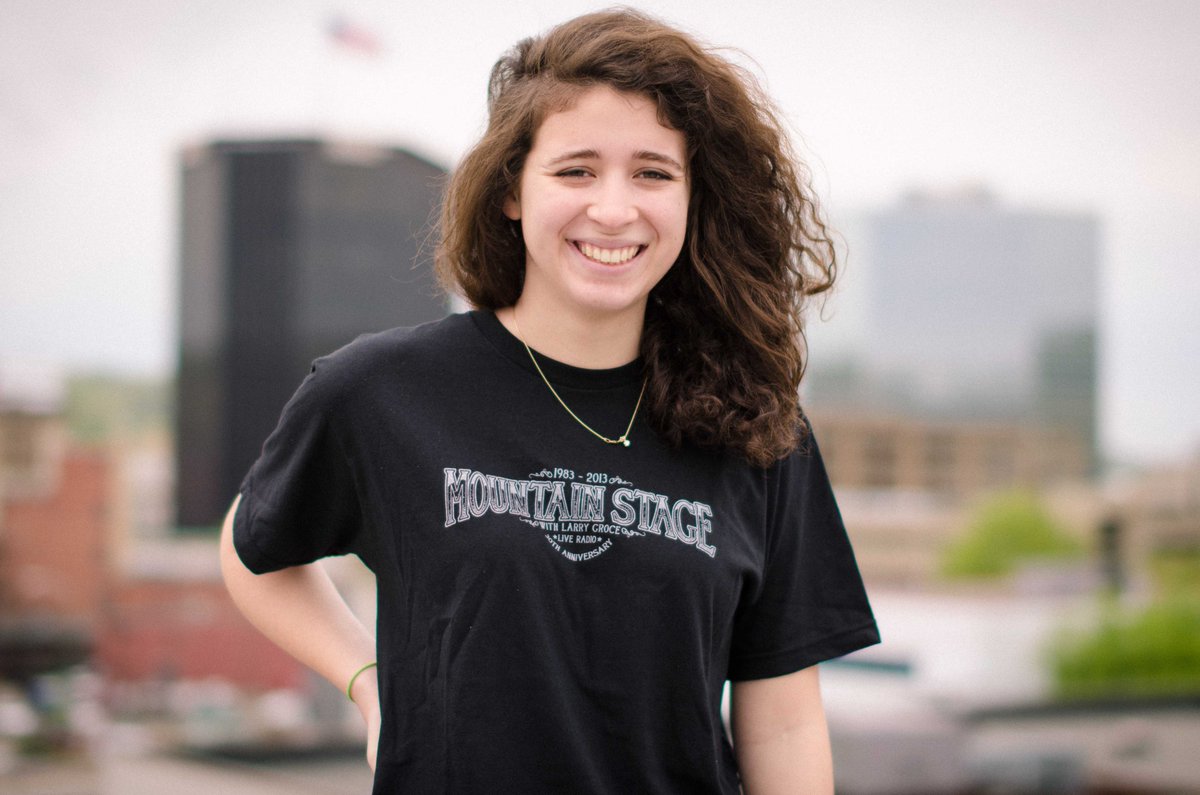 Joni: The Woman Behind #WVMusic

The story is courtesy of a partnership with the great folks at Clutchmov.  “An online lifestyle magazine for the Mid-Ohio Valley” – including Parkersburg and its surrounding community

The West Virginia music scene is as strong as it’s ever been. One of the people helping the scene grow is a 24 year-old girl from Charleston who can’t play music. As an assistant producer of Mountain Stage and host of “A Change of Tune” on West Virginia Public Broadcasting, she has every right to sit atop her throne and enjoy the view. Luckily for me, and any other West Virginia musician, Joni is as nice as they come.

Joni Deutsch has just wrapped up A Change of Tune’s #WVMusic series, which showcased 30 different musicians, artists, and venues around the state. I thought it was only fair to give Joni her own interview, so we can learn more about how this West Virginia girl has risen to the powerhouse that she is today.

Early years: Where were you born, where did you grow up, what were your hobbies?

I was born in Charleston, raised in Charleston, and currently reside in Charleston. When I say West Virginia is my home, I mean it. This state shaped my voice, my work ethic, and my perspective on life.

When I was younger, I would spend hours and hours at the local public library, reading my way through Nancy Drew or figuring out which 10 books would find their way back to my house for the night. In fact, my first interaction with Mountain Stage was at the Elk Valley Public Library when Mountain Stage’s band leader Ron Sowell would drop by on a regular basis for a children’s music event. Man, were those cool times.

I was a book worm, but I was also a sports fan. I played basketball, soccer, and tennis, and I participated in competitive swimming. I loved collecting basketball and baseball cards, and I would wear UNC Chapel Hill jerseys and shirts all. the. time. Sure, I collected Lisa Frank memorabilia and had a pretty nifty Beanie Baby collection, but I was a tomboy at heart.

College/career: How did you get to where you are? What made you choose to work for WVPB? How did you end up with your own radio show?

I actually began my college career as a biology student on a Pre-Med track. I loved music, but I couldn’t play music (despite a few years’ worth of piano lessons and some tone-deaf singing to *NSYNC), and I didn’t really have anyone in my childhood to steer me towards a career in broadcasting. But I loved making playlists for friends and discovering new music, which is why my interest wss piqued after spotting a campus notice for the local college radio station (WLUR 91.5 FM Lexington). I applied, got in, and began DJing a weekly indie/alternative/’90s-loving music program called “The DJ Joni Show.” It was a Friday night shift from 10-11pm, which isn’t the best time for listenership given the fact that it was broadcast in a frat party-loving town, but it was my shift, and I wouldn’t have given it up for the world.

And that dedication grew. After two years of DJing and working as a music director, I became assistant general manager at the station. As much as I loved studying in the bio lab, I came to the conclusion that my interests had most definitely shifted. By the end of my senior year, I walked away with a degree that focused on communication and a career that was built around radio and music.

I came back to Charleston and didn’t know what to do or where to go with my limited broadcast experience. Luckily, one of my childhood friends had a connection to Mountain Stage with Larry Groce, a live performance radio program that is produced by West Virginia Public Broadcasting in Charleston and heard around the nation on NPR stations and around the world with its podcast. I was fortunate enough to get a summer internship with Mountain Stage, which then transformed into a part-time position at West Virginia Public Broadcasting and the opportunity to create and host my own program (which was drafted as a soul successor to “The DJ Joni Show” but eventually was renamed as “A Change of Tune”). After a year or so, I was hired full-time job as assistant producer for Mountain Stage.

WVmusic: What was the inspiration? Give me some thoughts on the scene, and where you think it might be in ten years.

It’s been two years since I started “A Change of Tune.” Since then, I’ve interviewed a number of emerging acts for the program, some of whom call West Virginia their home. With these interviews, I’ve gotten a feel for West Virginia’s music scene and all of its ups and downs, with one of those downs being a lack of good (or, rather, any) press. We have something special here with our eclectic, authentic music scene, and I thought I’d do something to support it on a local and national scale. Because if we don’t support our scene, who will?

In April 2016, I began planning out this project with the goal of promoting and celebrating West Virginia’s music scene. With West Virginia Day falling on June 20 and “A Change of Tune’s” birthday following shortly thereafter, I decided to do a 30 Days of #WVmusic project, one that would showcase 30 artists around West Virginia with 30 brand new interviews on West Virginia Public Broadcasting. Whether they were an album artwork designer in Huntington or a punk rocker in Morgantown, each day of June was devoted to telling #WVmusic’s story with in-depth interviews and podcast-y chats.

It would be an understatement to say that this #WVmusic series was a lot of work. My late nights and early mornings were filled with #WVmusic research, interview recordings, audio edits, and segment transcripts, not to mention social media and #WVmusic promotion. This all took place alongside my normal work responsibilities of producing “A Change of Tune” and beginning my first term in grad school, as well as my secret preparations leading up to Mountain Stage’s June 26 show, when I became the youngest (and first female) guest host in the program’s 32 years. So yes, sleep was a bit touch-and-go throughout the month of June.

But it was all worth it. The series opened my eyes to West Virginia’s music history, particularly the absolute value of venues like 123 Pleasant Street in Morgantown simultaneously bringing in national talent and cultivating local music. With these one-on-one chats, I was able to see the highs (e.g. boundless inspiration, low cost of living compared to big cities) and lows (e.g. lack of support, need for more venues in more regions) of being an artist in West Virginia, particularly in regions like the Mid-Ohio Valley, where the amount of community support can make the difference between hometown artists playing at or away from home.

To me, the series was a success. Our first #WVmusic profile of Huntington music man Ian Thornton was a surefire start to the series with an interview that racked up thousands of web hits and social media shares. Another #WVmusic artist was featured on NPR Music’s site (that artist being Kaia Kater, who was recently heralded by Rolling Stone as an artist you need to know). And one of my favorite moments was posting an interview with Morgantown’s William Matheny on a Friday and seeing him make his Mountain Stage debut that Sunday. Throughout the month of June, I heard from so many radio listeners and web folk who said that they discovered and fell in love with so many #WVmusic artists because of the series, and that these stories made them so proud to be a part of West Virginia’s music scene. More than that, it seems as if this interview series has brought about new music friendships, as I can already tell that some of the profiled artists are beginning to collaborate with one another after sharing and commenting on each other’s interviews.

So what’s the big takeaway from the interview series? “Support local” comes to mind. Going to a local show at a local club, buying a CD from a local band, or even liking the local band’s Facebook makes a huge difference in #WVmusic falling or soaring. Because as most of these interviews will tell you, supporting a small artist’s indie tunes today could lead to singing along with a national headliner’s hit single tomorrow. And that’s what I see for the #WVmusic scene in the years to come: more indie/alternative West Virginia music being played in bigger markets, and people associating our Mountain State with good times and great tunes.

Side notes: Who’s your favorite band? Favorite non-work related activity? Is there anything I should include about your daily life that is awesome or different than most?

My favorite band changes on a daily basis. For instance, my favorite band in December was Unknown Mortal Orchestra (think Quentin Tarantino spaghetti western meets ‘80s synth-funk). Last night, my favorite band was Kaleo (think Hozier soul rock with an Icelandic twist). Right now, I’m rotating between Lucius (gloriously cool indie pop) and *NSYNC (well… you know). Since “A Change of Tune’s” motto is to never play the same song twice, I listen to a ton of different music each day and cycle through so many artists and genres.

My favorite non-work related activity is split between listening to podcasts while walking my Polish Lowland sheepdog (my neighborhood has an undeveloped street that is quiet, beautiful, and absolutely perfect for long dog walks) and Netflixing/chilling (don’t get me started on my love of British television shows and the art of loafing). I would also add phrases like “peach tea making,” “video game playing,” and “cupcake baking” to that list of activities.

Corey Shields is a singer-songwriter and Parkersburg native. He enjoys making music with his son and exploring new places with his wife. He has a deep love for breakfast foods and vanilla milkshakes. His music can be found on Spotify and iTunes.