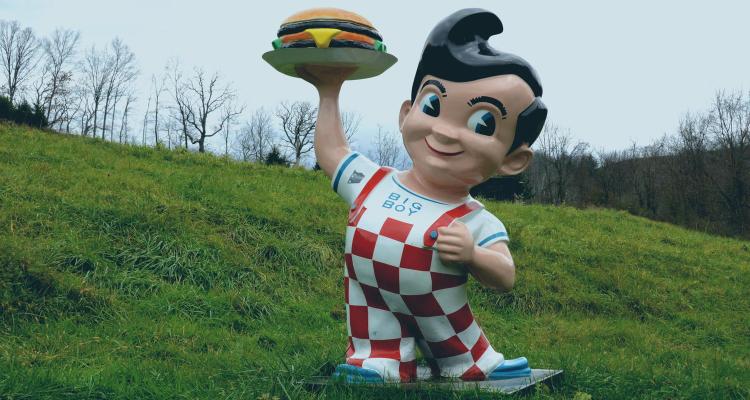 Andy Hogan is a sign collector in the Wheeling area, but his collection is more than a hobby. It’s become a giant art instillation on his farm that tells the story of a time gone by in Wheeling.

If you drive onto Andy and April Hogan’s farm outside of Wheeling, one of the first things you might notice is a red and white bleached out six foot by eight foot Big Boy sign complete with its trademark chubby boy in red-and-white checkered overalls. The sign used to hang in Wheeling before the Big Boy restaurant chain went bankrupt in 2000. Big Boy wasn’t a home-grown business, but it went like many of the home-grown businesses in Wheeling did: away.

Andy Hogan says he started to collect signs before anybody else did. That is to say, before it was trendy to do so. He says he really started collecting twenty years ago.

“I really particularly like Wheeling stuff because since I was in high school it’s dropped in half—the population. You just see one business after another close and I became like the grim reaper of business,” Hogan said. “I would knock on their door and they would give me—it’s a cheap hobby actually—getting the signs. Putting them up was another sort of effort. But actually collecting the signs? Nobody wanted them, so I took them.” 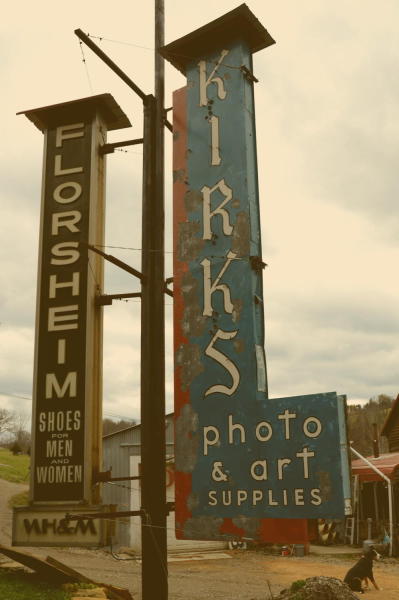 Hogan has a man-lifter, which looks like ancient, albeit eccentric, lawn sculpture. But he says it works. It’s hard to repair these days since all the manufacturers have long since gone out of business, but he uses it for the difficult task of hanging some of the other signs he’s collected.

Like the Kirks Photo & Art Supply sign. It used to hang on Market Street in downtown Wheeling. The sign takes Hogan’s sign-collecting to a new level—quite literally. It’s easily a 25-foot-tall blue and red structure complete with neon letters. Hogan powers the sign, by the way. At night it still lights up and illuminates the rural back driveway that leads behind the old farm house and up to the barn that sits on the property. Hogan hung the sign on a hefty, weight-bearing pole he erected in his back yard solely for the purpose of hanging such signs. There are two of these huge neon-embossed signs hung there. The other is the old Florsheim Shoes for Men and Women sign.

Hogan says the first Wheeling sign he picked up, though, was from Becker’s Hardware. It’s hung horizontally off of his garage. It has a red and white checkered border and in red letters it reads, “Beckers Inc. Hardware,” and in smaller blue letters beneath that it says “Purina Chows.”

“If you’ve ever been in Becker’s, you could go in there and get anything,” Hogan remembered. “They had three floors of stuff and somebody would wait on you and you could get seeds to chickens to – my mother went in there and got a new old-stock Conestoga wagon. You know, Wheeling was the gateway to the West and, you know, I’ll probably never see anything like that again.”

Many of the signs Hogan collects remind him of the people he grew up with. The blue and white twenty-foot long Imperial Display sign that lines an outside wall of the garage reminds Hogan of the Mendleson family that kept the store running for decades. 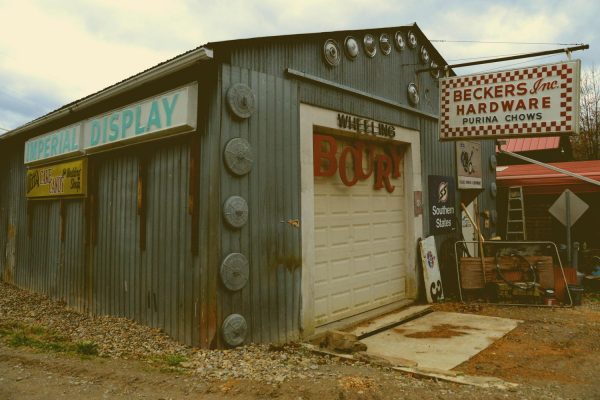 “I grew up with the Mendelsons. They lived in the neighborhood. And Mr. Mendelson had the business. Today when you go up to a store, I don’t know where the owner is. In China or something? Mr. Mendelson cared about Wheeling because his kids grew up in Wheeling. There was more of a local flavor about it. It all stayed in Wheeling. And Mr. Mendelson stuck it out to the very end. He was kind of like the band on the Titanic, you know?”

Clearly Hogan is the sentimental type. He doesn’t just collect signs, his property is littered with pieces of Wheeling’s history. The oldest piece in his collection is Woodsy’s Bar. He moved the dark-grained, 20-foot long wooden bar into his barn.

“This is Woodsy’s Bar. It’s the longest running bar in Wheeling. It’s pre-Civil War and it closed about eight years ago. A friend called me and said if I wanted to come get it, I could. So I picked it up, and got the tin ceiling. It’s I think from 1830? Somewhere around there. And I put the tin ceiling up in the addition I did in the house.”

Hogan’s house, too, is decorated with memorabilia: doors from various wrecked buildings; windows and plaques from old banks. He has an old Wheeling Marsh Stogies roll-top desk in his office space, complete with cigar burns and hidden compartments for storing small fire arms. Above the desk is an old award, framed, that may offer insight into Hogan’s love for Wheeling.

“Presented to Christian Hess & Sons, on the occasion of its one hundredth anniversary, from the Ohio Valley Board of Trade, in recognition of the many years of unselfish community services and for contributing so richly to the development of Wheeling as an outstanding American City.” 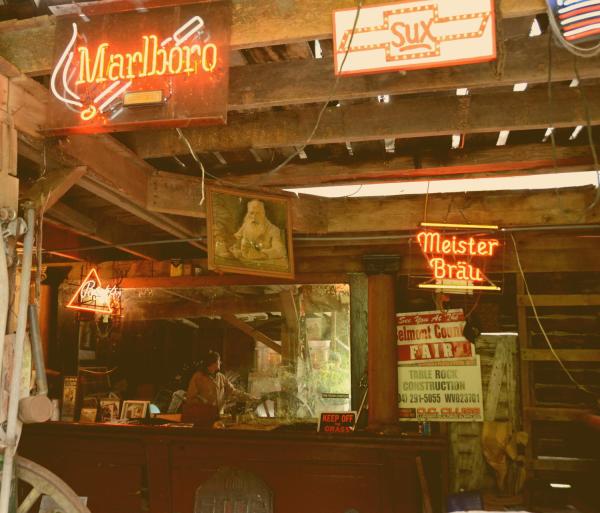 “My mother’s family is from here. They go way back. They had an outfitting store for the wagons going west. This is where they’d stop. The B&O Railroad went from Baltimore to the Ohio River, which was Wheeling, and then when you crossed the Ohio River in those days you were in the Wild West. And so they outfitted everybody. It’s where the Conestogas picked up cloth and dales china, tobacco, stuff you couldn’t grow or obtain out west. They had a big outfitting store, so they were here a long time ago.”

Mr. Hogan has lived in Wheeling all of his life. He vividly remembers a different era in Wheeling’s history.

“Town was booming in those days. You can’t imagine it today but you could hardly walk down the street they were so crowded. I went to Central Catholic from ’42 to ’46. The war was on and things were booming then. We got forty-five minutes for lunch.

“There was a Saseen Restaurant right across from the Hazel Atlas building. You’d go in there and it was just jammed. In the spring time, that’s when they sold milk in little bottles. Half pints with a little cardboard thing on the top.

“We’d walk in and they’d yell out, ‘How many milks?’ And if there were four of us we’d say, ‘Two white and two dark!’ And these little bottles would come flying through the air and we would catch them. We’d order sandwiches and we’d pick them up and go out and eat them on the curb because there was no place to eat inside. It was just a roaring place.”

Bill Hogan remembers when Wheeling was full of gambling and bars, tight knit communities, and industry. He remembers steel strikes when both the owners and the union leaders were local citizens. After the decline of the steel industry, the population dwindled and today large sections of town have been demolished. 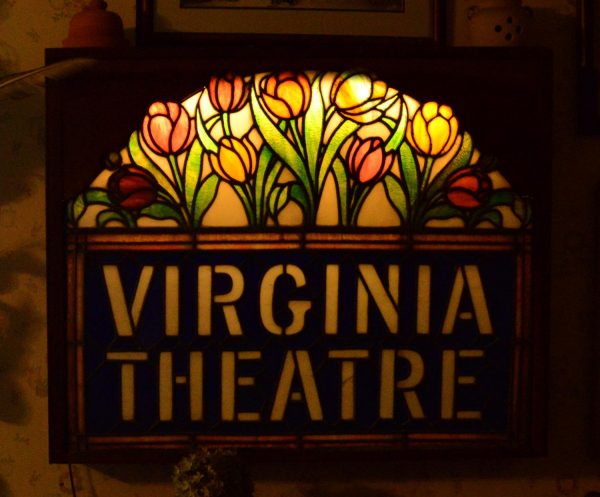 Andy Hogan continues to collect signs. Looking at a framed poster of The Reymann Brewing Company that he has hung over his mantel he explains that of the half-dozen buildings seen in the illustration, there’s maybe only one left and nothing much is happening with the riverside property or the town that remains.

“We get the small picture–and it’s not just Wheeling; it’s our culture–we’re big on recycling a pop can but we never think about recycling land,” Andy Hogan said. “We’ve gone from Wheeling to St. Clairsville and now the Highlands. In another twenty years it will be somewhere else. We’ll plow another place where we used to hunt or farm. You never recycle anything. It doesn’t make sense.”

Bill Hogan, meanwhile, is optimistic about the future. He said he has high hopes that the town will become a center for education—one business that you can’t ship overseas. 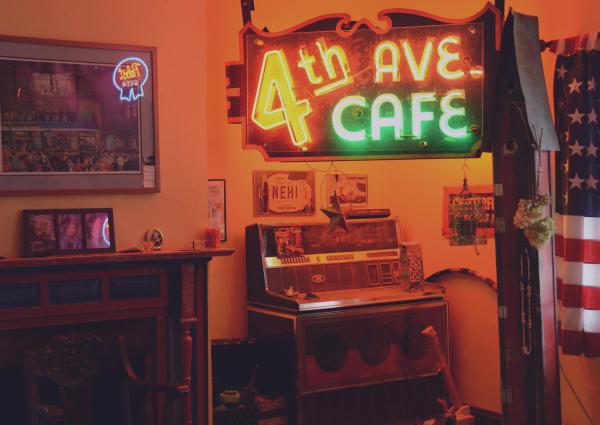