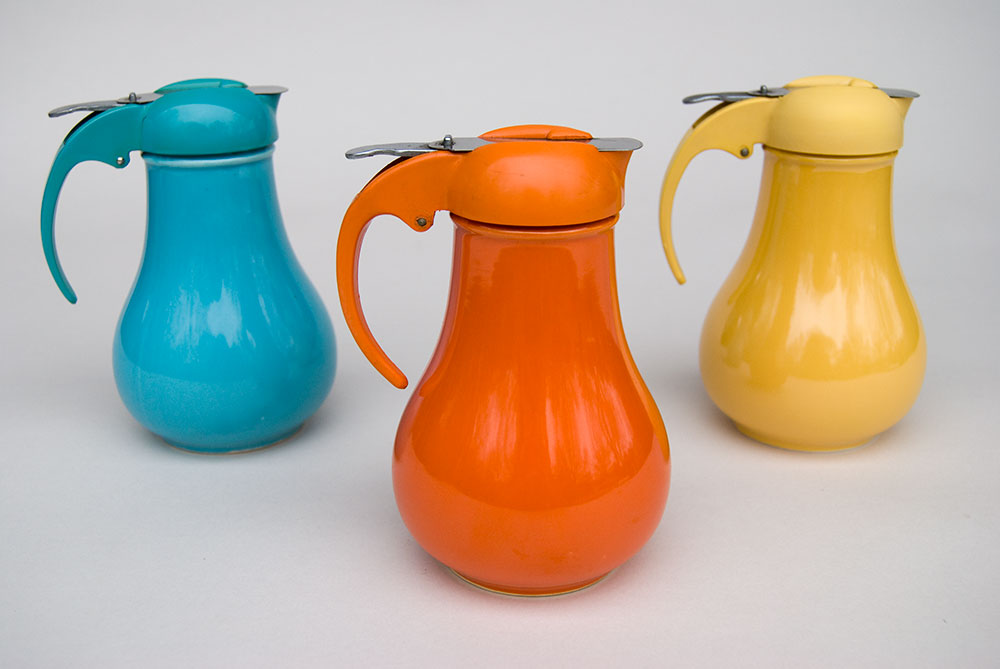 WV Plant is a Bargain-Hunter Magnet
The letter he had just seen from the War Department in Washington was curt, but its implications spelled trouble for Fiestaware. All it really said was that effective immediately, the government would be confiscating all supplies of uranium making it completely unavailable for all other industrial and commercial uses. They didn’t even explain what they wanted the uranium for. The folks at Homer Laughlin reasoned it must be some secret government project.The production manager at Homer Laughlin China Company slammed the door of the company president’s office and stomped back to his own office in anger on a sunny morning in 1943. He didn’t like getting bad news. Since 1936, the company had been enjoying tremendous success with its new colorful line of dishes called Fiestaware. Now, the government was, in effect, taking extraordinary wartime action that would stop production.

Unfortunately for the sprawling china company spread out on the banks of the Ohio River at the tip of West Virginia’s northern panhandle, uranium was a key ingredient used in the glaze that gave Fiestaware its bright distinctive color, especially the reds.

A few years after joining Homer Laughlin, Rhead came up with Fiesta and it was as much a new concept for end users as it was a design for dinnerware. Rhead started with a spherical theme for the line in an Art Deco style that came in five very distinct colors. The idea was that customers could get different pieces in different colors that they could mix up and use any way that caught their fancy.Fiesta was the brainchild of a famous English-born ceramacist named Frederick Hurten Rhead who joined the company in 1927 as art director. Rhead began his American career at a pottery at Tiltonsville, Ohio and traveled throughout the nation designing and making works of art that are much admired and in demand today. A vase by Rhead broke the world record for American art pottery when it sold for $516,000.

The line succeeded beyond Rhead’s dreams and before long. Homer Laughlin expanded the line and added new glaze colors and shapes. It became the most popular dinnerware in the nation.

Then came the government’s action confiscating all the uranium. But, as it turned out, that production manager may have had a temper tantrum for nothing back in 1943. Accommodating the government’s mysterious uranium request was just a temporary setback for Fiesta.

After the uranium problem and the forced hiatus, Fiesta came back using a glaze that the company said only used “de-enriched” uranium. But, tastes changed and sales had fallen by 1969 to a point where the company discontinued the line and concentrated its production on the hotel and restaurant china supply business it had cultivated over the decades.

But in 1986, the iconic dinnerware came back again on the 50th anniversary of its first appearance and began a steady rise in popularity. Now, using a glaze formula that contains no uranium in any way, shape or form, it’s all over the world and pops up frequently in television shows and movies.

If your grandma left you her old pre 1943 Fiestaware, don’t worry because it is perfectly safe to keep on display in your china closet. But experts don’t recommend you eat or drink from it, especially acidic foods that might leach out the leftover radioactivity. Since the half-life of uranium-238 is about 4.5 billion years, chances are that Fiesta and other dinnerware made in the 1930s should probably be a look-but-don’t- eat-from item for a little while longer.

On the day we visited, customers in the outlet store browsed the bins, wiped away factory dust with old rags, and placed their bargains in tiny shopping carts or carry baskets. Many held cell phones to their ears to consult with off-site friends or family members about colors and styles and call out to co-shoppers across the room when a particularly good find occurred.

Today, that uranium problem is just a footnote in history. Visitors flock to the china factory to comb through bin after bin of brightly colored dishes, canisters and dozens of other products that are slightly imperfect—a bubble here or a dot there—that keep them off the shelves of big time department stores. Homer Laughlin sells them in one room at bargain prices. In an adjoining room, they also sell the good stuff—the products that come out of the kilns in perfect condition. But those items sell at full price.

There’s a scavenger hunt atmosphere to the whole process that adds to the fun. One woman was on the hunt for two full sets of Fiesta in her son’s college colors. Another shopper was looking for a replacement lid for his bake ware.

Another needed new coffee mugs to augment her burgeoning collection of Fiesta.

Five times a year, the folks at Homer Laughlin go large by offering massive tent sales of Fiesta products. They have that down to a science with admission by ticket, rules for parking and how you can use your vehicle to pick up shoppers and purchases, and even traffic flow management out on the highway. You can learn more about that here.

The town of Newell, WV was and is a company town and the folks who built the company also took care of the people, creating amenities and facilities to make life easier for the people they employed including the company’s own bridge over the Oho River to East Liverpool that still exists as a toll bridge. The company also created a park complete with a zoo. It’s gone now but you can still walk through what is left of it and see the old animal enclosures.

It is a long scenic drive to Newell either up WV Rt. 2 or Ohio Rt. 7 but the trip is well worth it. You can even make a quick stop at the massive smoke-free Casino at Chester, WV for a few games of chance or a buffet lunch: we did both! Rhead died in 1942 but his pottery work is still shown in museums all over the world. As for his most famous creation, people just can’t seem to get enough of it both at fancy department store prices or at the popular factory outlet bargain bins.