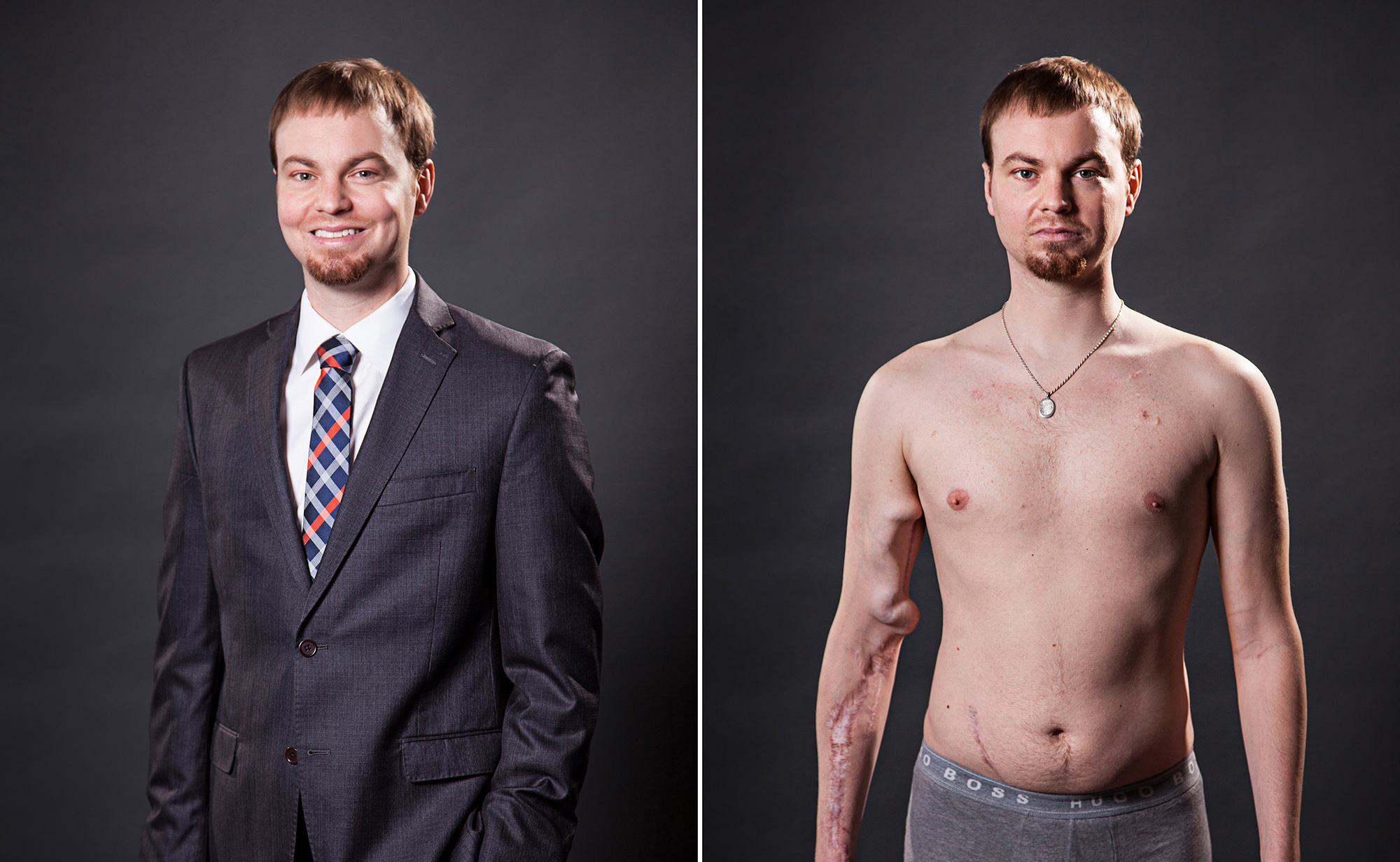 Addressing the Misconceptions of Organ Donation

Dressed up, Justin Cowley looks like everyone else. And in many ways, he is a typical, thriving 28-year-old. He turned his love for horses into his own equine and farm insurance agency in Charleston. He travels for work. He rocks a business suit.

But there are some things the business suit doesn’t show.

It doesn’t show his kidney disease, specifically called MPGN (Membranoproliferative glomerulonephritis) Type 1. Neither does the suit show his arm, on which he’s had 23 different surgeries for damage done to his veins during three years of daily dialysis. It doesn’t show the kidney his mother donated, which he had for a couple years before it gave out, nor does it show the current kidney which is keeping him going today, donated from a complete stranger from Minnesota.

It doesn’t show the deterioration his medication has caused in his hip bones, leading to one hip replacement surgery last fall at Johns Hopkins Hospital, with another coming up this spring.

In light of April being National Donate Life Month, Cowley not only wishes to spread the word about the importance of registering to become an organ donor, but he wants people to remember not to judge people by how they look on the outside.

“You never really know who is affected by illness just by looking at them,” says Cowley, who grew up in Sissonville, WV. “It’s important not to take somebody at face value. You never know what somebody is going through.”

Cowley himself didn’t realize what his disease would put him through when he turned 16 and agreed to designate himself as an organ donor on his driver’s license.

He had been diagnosed for two years at that point. He had to give up basketball and couldn’t ride horses as much, but he didn’t foresee organ donation in his future.

Then, during his freshman year of college at Marshall University, he had his first transplant, when his mother donated her kidney. She’s been very selfless throughout his illness, Cowley says, not only donating her kidney but helping him through dialysis and being there for him to this day when he’s not feeling well. She also works at his insurance agency.

Her kidney lasted him a couple years. Then he spent three years undergoing daily dialysis, a four-hour process in which two needles were inserted into his arm allowing his blood to flow out of his body, go through the dialysis machine—which filtered the blood in a way somewhat similar to a kidney’s job— and flow from the machine back into his body.

The grueling daily routine wreaked havoc on his arm. At first, Cowley went to a center each day to have dialysis done. Eventually, with the help of his mother, he got a dialysis machine at home, and after his mother and aunt underwent dialysis training, he was able to stay home for the process.

He continued school at West Virginia State University, but after completing about three years, he was forced to drop out. College was a hard time. He was exhausted.

Cowley thinks some people at school were suspicious of him. He had that marked-up arm. He sometimes had a blanket and pillow in class. He had a handicap tag on display in his car and parked in the handicapped spots.

“People called the police on me,” he says. But he gets it. They thought he looked like a normal guy who was breaking some rules.

Eventually, a young man the same age as Cowley, who lived in Minnesota and was a perfect match, was inspired to donate his kidney. After his own father was saved by a liver transplant, the young man wanted to help someone else have a chance at life. His name is Andy.

“What Andy did for me was something,” says Cowley. “’ It’s not every day, unless you’re personally affected, that you’d expect somebody to do something like that.”

That kidney is still doing well, and Cowley was able to get his business off the ground and carry on living in such a way that many people don’t even realize he’s living with a serious autoimmune disease.

“Some people stare at my arm,” he says. “One time, a waitress told me it looked like it had been cut up with a chainsaw. I don’t try to hide it. It doesn’t bother me one way or another.”

It does occur to him, however, that people may think of him as weak and not understand the fatigue he experiences when he’s feeling sick. He urges people to try to think twice before they rush to conclusions.

He tries not to judge. People are aware of racial profiling, Cowley says, but there’s also a lot of general population profiling that goes on, which can also be damaging.

Cowley also urges those who haven’t registered to become organ donors to do so. Unfortunately, people have misconceptions about organ donation. One is the false belief that in the event of a health crisis, doctors won’t try as hard to save your life because they would rather donate your organs. That would not happen.

“Your life is always the first priority,” he says.

Cowley is well aware that many people are even more desperately in need of organ donations than he has ever been. According to Donate Life America, more than 118,000 Americans are waiting for a transplant, and an average of 22 people die daily because a donation is not received in time. About 54 percent of American adults are registered donors.

“I just feel like it’s an easy thing to do to help save somebody’s life,” says Cowley. “As a human being, it’s our duty to help each other. I know it’s changed my life that I’ve been able to get two kidneys and live a somewhat normal life, and some people have it harder than I do.”

For more information about organ donation or to register, visit www.donatelife.net.

Jean Hardiman came from northern Ohio to West Virginia in 1998, not expecting stay. She took her first newspaper job, figuring it was a stepping stone in a career that would lead elsewhere. But when the time came, she chose to stay close to the friendly people and beautiful surroundings she’d grown to love. Hardiman spent 17 years with The Herald-Dispatch in Huntington and now writes for publications, businesses and organizations throughout the region. She lives in Huntington with her husband and daughters and finds true joy in writing about the dynamic people and amazing things happening in her new home state.