There is Only The Commons

Jason Marling
If I asked any John Marshall High School graduate from 1968 until 2015 where they ate lunch, I would get a specific answer. They wouldn’t have to think about it. They wouldn’t have to try to remember. They would answer the question without missing a beat.The “South Commons” or the “North Commons.”The answer for anyone who attended JM would be definitive.There’s no gray area on this topic for John Marshall alums.

The response would likely be followed with an “I would have never eaten lunch in the (North/South Commons).” Some even add a comment like “I wouldn’t be caught dead in there” referencing the opposite commons from their preference.

This point was clearly illustrated on my first day as an assistant principal at JM. Two freshman who were preparing to eat their first high school lunch were in the hallway looking through the glass into the commons. I approached the students and asked, “What are you guys doing? Get in there and eat” to which the response was “I’m not going in there; that’s where all the _____ (insert word) eat.”

Now depending on where you ate lunch during your days at JM, the blank above could be filled a hundred different ways, and most of the chosen words would be unflattering.

Near the end of my first year at JM, I had the pleasure of taking four John Marshall students to Charleston. While on the trip, I brought up the topic of the North and South Commons to get their perspectives. A few years prior to my being hired at JM, Corey Murphy, the Principal at the time, reopened the Senior Commons exclusively for seniors.

In my conversations with the senior boys on the way to the state capital, among the reasons why they enjoyed the Senior Commons was something interesting. They liked the Senior Commons because they were able to reunite with friends they had rarely seen since middle school.

Why hadn’t they seen these old friends? Where had these kids gone?

These students hadn’t transferred to Wheeling Park and returned for their senior year.

They weren’t expelled from school for the past three years.

They hadn’t vanished from existence.

The answer was very simple: those who ate in the North never tread foot into the South and vice versa. It was that way from their freshman year until they were reunited in the Senior Commons.

These “old” friends drifted apart because they never saw each other.

And NONE . . . ZERO . . . were willing to cross the imaginary line into the other commons to eat lunch with the kids they had known since kindergarten!

Saying the line was imaginary is a misnomer. The line was actually a wall. A wall that divided the school into factions. 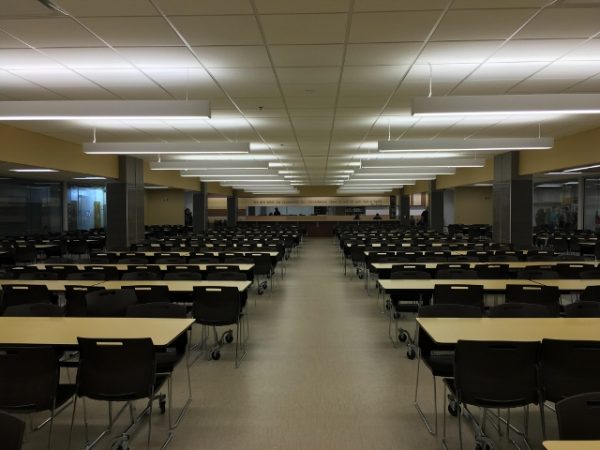 A wall that no longer exists thanks to the construction taking place at John Marshall.

Now, all John Marshall students eat lunch together. There isn’t a North or South Commons. There is only the Commons.

No longer will all the band students eat in one commons. The athletes will not be separated from their non-sports participating friends. The shop students will get their trays with the non-shop students. The speech team will eat with the yearbook staff. The chorus students will share tables with the wrestling team. The “geeks,” “preps,” “nerds,” “jocks”….and on and on and on…now all eat together.

Sure, students will still sit in their groups. They will still gravitate to like-minded classmates. There will still be cliques.

But I’m a firm believer that breaking down the real wall that separated the North and South Commons will begin to break down some of the imaginary walls that divided our school and our students through the years.

This article appears on Weelunk via a partnership with the John Marshall High School Blog.