Home
Ideas
The above was borrowed from a brief interview with David Giffels, the creative brains behind Beavis & Butthead turned professor, author and award-winning writer. Speaking with fierce pride of his hometown of Akron, Ohio, he could just as easily been talking about Wheeling. You see, it was about this time last year that I discovered David Giffels as I searched for answers to the many friends, colleagues and even family members that asked – “Why Wheeling?”After graduating from Bethany College I spent several years living in Washington, DC, Columbus and Pittsburgh. My career in the field of archives took me to work at the Library of Congress, sent me as far away as Trinidad & Tobago, and allowed me to count as clients and colleagues most of the major research libraries and archives around the country. By age 28 I could consider myself relatively successful – a great career, a house in a nice neighborhood, a terrific wife (another Wheeling native) and a daughter on the way. Even still, something was missing. Pittsburgh was fine (or as fine as could be for a Cleveland Browns fan), but returning to the Ohio Valley was always in the back of my mind.A surprise job posting in the winter of 2013 ended up being our ticket home. There are not many archival jobs in the Friendly City, so the risk of losing this job to someone else was enough for me to take the leap. My boss and coworkers in Pittsburgh were excited for me if not fairly dumbfounded. How could I leave everything I had worked towards to go to…Wheeling? West Virginia? Their foreheads would wrinkle and the word “Wheeling” would come out with just enough disdain to be apparent. But I knew something they didn’t know.

I knew that young professionals like myself were choosing to move back to or stay put in Wheeling. While record numbers of young people are leaving West Virginia for opportunities elsewhere, there is a growing “young guard” choosing Wheeling…on purpose. They are investing in and breathing new life into many of our beautiful, if not slightly dilapidated, neighborhoods. They are opening (and supporting) a growing number of downtown businesses. They are involved in numerous community and philanthropic organizations, giving freely of their time and hard earned money. If Wheeling is to go as this young generation goes, we are in good hands.

I knew that Wheeling offered a quality of life that made me want to raise our daughter here. Our public and private schools are counted among the best in the state. We have a park system that is second to none, a world class entertainment venue in the Capitol Theater and a thriving waterfront that hosts festivals and events nearly every weekend throughout summer. We have a symphony orchestra, a professional hockey team and we are a Certified Arts Community. Having spent years traveling around most of the major and many of the smaller cities in this country, I can tell you that Wheeling has a sense of community spirit and pride not found everywhere else. Weelunk.com is an affirmation of that.

I knew that opportunity abounds in Wheeling. While living in a larger city like Pittsburgh makes it easy to become faceless, living in a city like Wheeling offers the ability to stand out. I make no claims to be a ‘big fish in a small pond,’ but it’s a great feeling to go almost anywhere in our city and run into someone I know. I have every opportunity to contribute on any number of boards, steering committees or associations. Wheeling allows you to put your own stamp on the city and help to shape where we’re headed. I can be actively involved in making a better city for my family.

I’m not in Wheeling because I have to be. I’m not here because I failed and I’m not here because I couldn’t be anywhere else. I’m in Wheeling on purpose. There are some great people doing great things in our city and I am lucky to be along for the ride. For those of you that live in Wheeling, I would implore you to be a champion for your city. For those not currently living in Wheeling, I would implore you to come back – this is not the same city you might remember. And when someone asks you “Why Wheeling?” as they are bound to do, ask them “Why not?” 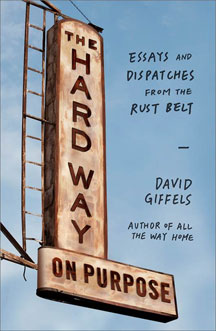 David Giffels stopped in Wheeling earlier this year for a reading of his latest book, “The Hard Way on Purpose – Essays and Dispatches from the Rust Belt.” In noting the parallels between Akron and Wheeling, Giffels observed that Akron was “done losing.” He sees Wheeling in the same light. So do I.